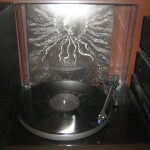 Recently, End All Life reissued all four of Deathspell Omega’s pre-Mikko LPs – full-lengths proper ‘Infernal Battles’ and ‘Inquisitors Of Satan’ along with the ‘Manifestations 2000-2001’ and ‘Manifestations 2002’ compilations (both of which were only actually released in 2008, some six years after the incumbent vocalist had replaced the disillusioned Shaxul).

As I had missed these albums first time around, here was a perfect opportunity to play catch-up. I swooped for all four, wallet open wider than a whore’s snatch. On these recordings, we of course are exposed to a completely different Deathspell Omega than the innovation, orthodox force that would materialise on the ground-breaking ‘Si Monumentum Requires, Circumspice’, but the old, unrefined incarnation is not without its merits.

The downside is that the label cut some corners (using the same inner sleeve on all four records, for example; no lyrics included; original artwork omitted from ‘Infernal Battles’ and ‘Inquisitors Of Satan’); the upside is that, by doing things in such a no-frills, no-fuss fashion, they kept the price down and allowed collectors to grab these historic items for just €60. It’s a good deal and, for me, this record is the pick of the bunch.