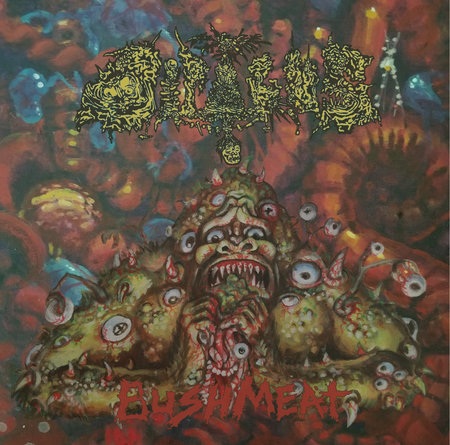 Dipygus skilfully secrete a sickening, repulsive sound that is both reassuringly familiar yet captivatingly fresh on their oozing, putrid sophomore full-length, ‘Bushmeat’ – a gory slab of nauseating Death Metal that acknowledges older masters like Autopsy, Coffins, Exhumed, Carcass and Mortician as well as comparative newcomers such as Void Rot, Undergang, Vastum and Krypts whilst retaining a somewhat unique, monolithic vision all of its own. There is an undercurrent of doom seeping through the nine infestations contained hereon, Dipygus delivering an unnerving form of psychological horror rather than depending on splatter tactics and / or all-out aggression.

The use of samples and sound effects cranks up the queasiness and the musicianship is top notch, with guitars, bass, drumming and torrid vocals all clearly audible and prominent in the noxious mix, frequent changes of pace and direction serving to both keep things interesting and also to add variety and dynamic to proceedings. Meanwhile, a suitably organic production ensures that the songs are encrusted in mould, rot and decay, just like Dave Watson’s head.

Lyrically, the Californians also adapt an interesting approach, tackling a series of obscure and mysterious phenomenon – such as on ‘St. Augustine, FL 1896’ and ‘The Khumjung Scalp’ – as well as standard cannibalism (‘Long-Pig Feast’), slug infestation (‘Myiasis in Human Mouth’) and just general disgustingness (‘Plasmoidal Mass (Slime Mold)’ – the centrepiece of the album and a decomposition that demonstrates the band’s innate dexterity and catchiness).

All fans of old school Death Metal and Death Metal with a dash of doom will find plenty to salivate over on ‘Bushmeat’, from the fitting bookends provided by ‘Ape Sounds’ and ‘Ape Sounds II’ to the dread and horror of the obscene and manic aforementioned ‘Plasmoidal Mass (Slime Mold)’ and the rotten, sludgy slime of ‘BushMeat’ itself, which clocks in at seven sick minutes and epitomises the power and prowess of a lean, mean Death Metal obscene.