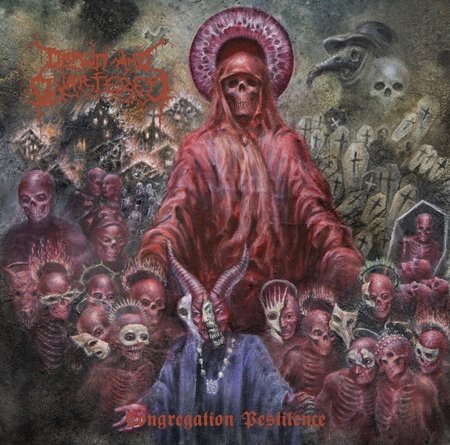 For now, the relentless Death Metal machine that is Drawn and Quartered remains undiminished by the passing of time. To the contrary, the Seattle stalwarts continue to fortify and fine-tune their attack with each addition to their impressive discography, a journey which has led us to their incendiary, inexorable eight full-length, ‘Congregation Pestilence’.

With one boot planted firmly in the past and one in the present, Drawn and Quartered have delivered an album that presents the best of both worlds – the nostalgic heft, might and devilish melody of traditional DM is very much evident but they also inject suitable doses of condensed, cavernous murk to the mire which will appease those of us who want their Death Metal both fresh and foul at the same time.

As we have come to expect, the nods and similarities to Immolation, Incantation and Dead Congregation are undeniable but, as soon as the second of nine bombardments erupts though the speakers, namely ‘Age of Ignorance’, one can also detect a ‘Blessed Are The Sick’-era Morbid Angel influence in the twisted solos and diabolical display of downright dread. An ancient evil is conjured forth and it appears in all its murky, malevolent glory courtesy of a skilled production that paradoxically manages to retain clarity amid the seemingly muddy maelstrom.

While ‘Congregation Pestilence’ has the capacity to escort you back to those magical days of yore when Death Metal was but an itch in Satan’s scrotum, it’s certainly not in any way derivative or tired. To the contrary, these 38 minutes of dark blasphemy showcase the defiant, triumphant capabilities of an established force frightening close to the top of their game even after all these years.