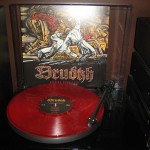 So what does ‘A Furrow Cut Short’ bring to the pagan altar that wasn’t delivered on the previous nine Drudkh full-lengths? Absolutely nothing, to be fair. Yet, strangely, that is almost as much a compliment as criticism.

See, Drudkh was the finished article pretty much from the word go, so there hasn’t really been anywhere for them to evolve into since opening gambits ‘Forgotten Legends’ and ‘Autumn Aurora’ established them as a byword for Ukrainian Black Metal excellence.

Okay, they’ve tweaked their sound here and there along the way and those who live and die by the band (if such fuckers exist) will point knowingly and cerebrally to the various eras and epochs of their history inseminated along the way, but I never really listened quite closely enough and honestly would struggle to determine one Drudkh song – or album – from the next if played to me blindly (and I own (and appreciate) them all).

Is the law of diminishing returns setting in? Possibly. Is this mandatory? Probably not. But Drudkh are still recording very good Black Metal and long may it continue. I suppose it all comes down to how much of a Drudkh addict you are. Personally, I like ‘A Furrow Cut Short’ but won’t get withdrawal symptoms when I file it away.

I suppose the bottom line is that Drudkh has become such a safe bet that it’s hard to get overly excited – but the mark below speaks for itself. Double-vinyl edition is very smart, indeed, by the way.