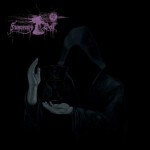 Funerary Bell tick all the boxes. The Finns have an air of mystique about them, with members operating under monikers like Templar of the Seven Suns, Invoker of the Shadows and Caller of the Sepulchral Doom and the liner notes revealing that their debut full-length was recorded ‘somewhere in Finland during April 2010’. Sparing with the information then, in true Black Metal tradition… They also perform their songs in English, but their grasp of the language leaves something to the imagination. For some benign reason, I always find poor English to be a real plus point in underground BM.

My previous exposure to the band came via their split LP with Blood Red Fog, a record that contained interesting tracks from both hordes, so I approached this one with more than a hint of excited anticipation. I am not disappointed by the result: ‘The Coven’ is an adequate slab of grim Black Metal that stays true to the traditions of the subgenre but also ventures – albeit only fleetingly – into obscure, occult realms. I suppose the lack of genuinely esoteric parts was a slight let-down, but in general these 40 minutes constitute a superb debut full-length.

Third track ‘Cainian Confessions II’ was the first to really grab my attention, introducing a menacing creepiness to proceedings, veering between slow-to-mid-pace crawl and more punk-infused speedy parts – a good showcase of Funerary Bell in full flow. The abrupt end makes way for the rather mysterious ‘Circle Within Circle’, which begins calmly, like a sombre deathmarch, and evolves into a simple death / thrash amalgam. Clearly, the Finns are not going to break any speed records with their delivery. For the most part, the songs are slower than the village idiot, but the restraint is to be admired rather than admonished. A song like ‘Conjuration Of Thy Majesty’ simply wouldn’t work at any other tempo.

The music is simple throughout and the vocals are quite basic too, fluctuating between a croak and a DM growl rather than a BM rasp, so ‘The Coven’ shouldn’t really work. But the overall result is a sum total that’s greater than the individual parts; the area where Funerary Bell really succeed is that they don’t try to be something they’re not. In the end, their debut is unspectacular and far from groundbreaking. It’ll probably be quickly forgotten. But it’s still a creditable and worthy piece of slow-paced Black Metal that’s deserving of respect, recognition and acclaim.