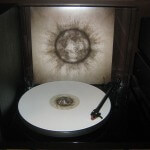 I took a leap of faith with this one and purchased the record without having exposed myself to any of the band’s music. Figured I could deduce with a reasonable degree of accuracy from the band’s name and nationality pretty much what I was going to get. Also, I have a lot of faith in the label.

Most times 2 + 2 = 4, no matter what the know-it-all motherfuckers who pop up everywhere try to tell you…

Great production, too, and the white vinyl LP comes in a deluxe gatefold cover with a – wait for it! – big bastard poster included. Lyrics on the inner fold of the jacket as well. All in all, an album that does exactly what it promises and, while admittedly lacking that indefinable something that would qualify it as a classic / mandatory purchase, ‘Heretic Cult Redeemer’ – which could be described as a less-esoteric and more-understated Acherontas – is nonetheless a commendable volume of solid Black Metal.