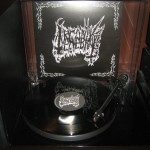 When ‘Odium In Homines’ was originally released on CD format five years ago, I snapped it up and fell in love with it instantly. Arcanus Tenebrae’s debut full-length is a magnificent slab of occult, underground Black Metal art, so I was thrilled to read that it was getting a vinyl reworking (alongside follow-up ‘Summa Essentia Obscura’)

While this isn’t a new release per se (only wankers use the phrase per se), it is certainly worth checking out and – to my mind – showcases some of the finest grim, noisy blackness to emerge from the flourishing Lusitanian scene. It’s raw and fierce and harsh but there are some catchy bits in there, too. A nice inlay is included, but no lyrics.

Funnily, I’d expect a release like this to surface on Discipline (or Altare) rather than Drakkar. But there’s no denying the quality of the music on ‘Odium In Homines’ and I’m looking forward to seeing what this nightmarish fiend comes up with next.