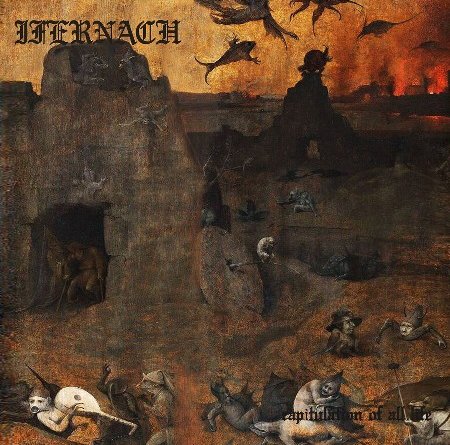 The best Black Metal is imbued with an ability to seemingly transcend aeons, intangible and timeless in its essence, traversing the linearity of time to instil a sense of wonder, awe and splendour, crafted and executed by channelling darkness without regard for expectation, convention or compromise to impact upon the most primal, savage and basic instincts. Possessed with infinite pride and majesty, embodying a ferocious spontaneity, Ifernach’s fifth full-length, ‘Capitulation of All Life’, is a recording that belongs in rarefied company, reeking of galloping misanthropy, contempt for pitiful humanity – particularly the Christian fools – and unapologetic adulation of Satanic might.

Although the album rages and bristles with belligerence, ‘Capitulation of All Life’ is also a rich, diverse and glorious body of work, sometimes reminiscent of early Emperor, Graveland or Burzum with its classical tendencies and infectious orchestral arrangements, though all of this is (mercifully) achieved within the confines of traditional Black Metal so the experience remains grim, sombre and decidedly adversarial throughout. The compositional creativity of lone wolf Finian Patraic sets Ifernach apart from the horde of imposters masquerading as Black Metal in these hysterical, shameful times and this is even more remarkable when one considers how frighteningly prolific this artist has been over the past five years, producing as many full-lengths during that time as well as contributing to a veritable bounty of splits and EPs.

Serving as a fitting epitaph for humankind, ‘Capitulation of All Life’ ardently celebrates death, demise and the end of all things, merging frozen riffs with chilled shrieks and pounding background drums to conjure a tumult of derisive black chaos which is as infectious and arresting as it is intense and malign. Indeed, the devilish melodies strewn across the 36 minutes of this recording – including masterful unsettling synths – help to elevate the album as a whole to a level most can’t reach.

Opening with an ominous instrumental and concluding with two more (equally enthralling), ‘Capitulation of All Life’ delivers a surprising amount of variety on the seven curses in between, from the unrestrained fury of ‘Gathering of the Archangels’ to the occult lament of ‘Until the World Burns’, the ritualistic grandeur of ‘Mundo Malism’ or the beguiling rapture of ‘Beholding The Talisman Of Doom’. As it charts its instinctive, natural path, the album is never dull, always invigorating and life-affirming. Now, there’s the bitterest of ironies.