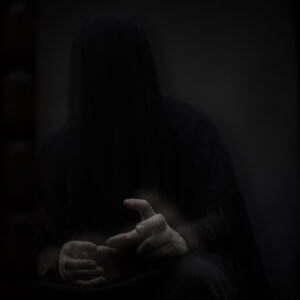 The second coming of Inferno was initiated on their sixth studio full-length, the magnificent ‘Omniabsence Filled By His Greatness’, which represented quite a curveball when it was inflicted upon the unsuspecting masses in 2013, and has since gathered pace inexorably, culminating here and now in the 2021 masterpiece that is ‘Paradeigma (Phosphenes of Aphotic Eternity)’ – an intangible, immense and frankly indescribable body of purified sonic occultism that transcends not only Black Metal but dark art itself.

Upon the release of ‘Black Devotion’ in 2009, Inferno’s legacy as one of Czechia’s most important and longest-established Black Metal forces was already assured. Deservedly so. But the metamorphosis witnessed across their last three albums [‘Gnosis Kardias (Of Transcension and Involution)’ arrived wondrously in 2017, buttressed between ‘Omniabsence…’ and ‘Paradeigma…’)] as well as Inferno’s stunning contribution to the ‘Zos Vel Thagirion’ split LP with Devathorn amounts to a remarkable reinvention. The serpent has shed its skin; long live the serpentine one!

When I spoke to the egregore of Inferno in February, they intimated that the succession of Ska-Gul to compositional duties was one of the main catalysts behind their dramatic change of direction, whilst a natural evolution of sound has clearly also taken place. Thus, the one-time masters of traditional Black Metal have mutated into reborn and re-energised spiritual, occult Black Metal pioneers, consistently pushing the boundaries and taking their inspired art to new levels of elevation. With each new release, Inferno soar higher.

The inhuman, otherworldly reverberations channelled on ‘Paradeigma (Phosphenes of Aphotic Eternity)’ not only assault the senses but work on many other levels that I can’t even fully process, scarring the soul, stripping the psyche. Courtesy of a masterful production from Stephen Lockhart at Studio Emissary, a seamless integration / synergy has been achieved between vocals and instruments, enabling the six new spells to flow forth as an ethereal stream of consciousness. Accessing the conscious, unconscious and subconscious mind, they wash over the listener and bring rich rewards.

Formless and mystical, Inferno speak in tongues now, inducing trance and filling the mind with wonder. There is an atmosphere – or presence – to their abstract art that belongs not in this world but the one below. ‘Paradeigma (Phosphenes of Aphotic Eternity)’ is an immersive, consuming experience more so than an inexplicable compound of sounds, thus completing the decadent transmogrification of Inferno into the very essence of transcendental Black Metal.