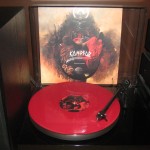 Kampfar’s fourth full-length in eight years – and sixth in all – features eight songs which clock in at forty-seven-and-a-half minutes. Generally, I find Pagan Black Metal to be pretty lame, but ‘Djevelmakt’ is certainly the exception to that rule. While I’m not sure how it compares to Kampfar’s other output (I purchased ‘Fra Underverdenen’ many years ago but nothing else until now), this is surprisingly enjoyable stuff.

All in all, what we have here is a solid Black Metal album with a lot of melody, great performances and a massive production. Even though the songs are average in length, ‘Djevelmakt’ has an epic feel to it. And the double LP edition is spectacular; two 180g records contained within a glorious gatefold jacket with magical artwork (but no lyrics).