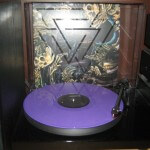 When Twilight released their eponymous debut album nine years ago, the line-up was about as close to a Black Metal enthusiast’s wet dream as you are likely to get: Malefic from Xasthur; Wrest of Leviathan; Draugar mastermind Hildof; Azentrius of Nachmystium infamy; and N Imperial from Krieg. Fucking unbelievable! Alas, while ‘Twilight’ was a reasonable record, the composite didn’t come near to equalling the sum of its individual parts. At the time, that was a massive disappointment (and still is).

Only two members of that original combo remain. On ‘III: Beneath Trident’s Tomb’, Wrest and Imperial are joined by two guys I know fuck all about – keyboardist Sanford Parker (Minsk, anyone?) and 55-year-old Thurston Moore from bloody Sonic Youth. What the fuck! Ironically, with such a bizarre line-up … one that clearly should never work … this for me is the stellar album that Twilight failed to produce in 2005.

I love everything about this record, particularly the least Black Metal track of the six, closer ‘Below Light’. I almost hate to admit it but ‘III: Beneath Trident’s Tomb’ is thoroughly superb stuff  – and on a bigger label. Well I’ll be damned and fuck me purple up the ass with a fallen tree trunk.