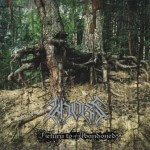 What we have here is melodic pagan Black Metal with some astral leanings. Prog metal, maybe. I’m sure it’s not without its merits but Khors lost me somewhere along the way. In the end, I was left feeling utterly underwhelmed by the whole experience. Ultimately, I like Black Metal; not something vaguely resembling Black Metal or containing some of the component parts of Black Metal mixed with a (shit) second genre (space rock or folk). I don’t care for that sort of nonsense and I don’t see why you should either if you’re reading this post.

After a brief, benign intro, I was feeling optimistic enough when ‘Lost Threads’ started to blast through my speakers. My initial impression was of harsh, searing pagan BM, more black than pagan. My hopes were raised by the prospect of a grim ride. Alas, strong melodies supplemented by sparing use of ‘70s keyboards and wind instruments (or the sound of them), buffeted by soaring leads soon became the order of the day.

Granted, the album is blessed with an earthy feel and, granted, ‘The Seas Burn Of Omnipotence’ is a grandiose workout that displays no end of musical competence, technical prowess and / or song-writing skills – but that’s simply not what I’m looking for in my Black Metal. Khors do their own thing and their accomplished musicianship is difficult to fault but it seems to me that Black Metal is becoming more and more sanitised, more diluted, to the point where it’s not really Black Metal anymore. BLACK METAL – remember that? Fuck.

These Ukrainians are full of passion and they have crafted an album that will probably gain them a lot of followers. I can see this appealing to fans of traditional metal, power metal, psychedelic music or Pink Floyd – but it shouldn’t appeal to anyone who wants some real menace in their music. You can headbang along to ‘Return To Abandoned’, grinning innanely to your heart’s content … and that’s a good enough reason for me to dismiss it entirely. It’s all too clean, too smarmy, too sugary, lacking in any dissonance, angst or genuine aggression.

A harmless release from a poor man’s Drudkh; not in the same league as Darkestrah.