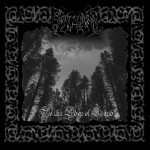 Five years have passed since I originally wrote this review. Enjoy the resurrection:

Boasting five manifestations of raw USBM nestling amid six haunting instrumental arrangements, ‘To The Edge Of Land’ is a unique and worthy addition to the proliferation of quality Black Metal emerging from the germane scene west of the Atlantic. Everything about Sapthuran and this CD is rooted in splendid simplicity. Adopting a mostly straightforward approach, ‘To The Edge Of Land’ is a classic, shining example of just what can be accomplished by focusing on the basics.

Sapthuran is the one-man vision of a diabolical one who operates under the unpretentious handle of Patrick Hall. The visionary wears his love of bands like Burzum and compatriots Judas Iscariot on his blackened sleeve but serves up his own interpretation of what raw, primitive BM should sound like. If debut release ‘In Hatred’ announced the arrival of an irresistible force of nature, the follow-up has brought Sapthuran to the next level.

What we have here is essentially lo-fi, stripped down malevolence counterbalanced by persistent acoustic interludes and passages, all cloaked in an unsettling atmosphere that would savage even the smoothest beast. While Sapthuran Album #2 is every bit as bleak and minimalistic as its precursor, rippling with raw and isolated hate, the choking melancholy is upped by the presence of classical guitars. At times, this sounds almost like acoustic Black Metal (or Black Metal with folk genes) such is Hall’s predilection for the aforementioned instrument. However, do not be fooled – ‘To the Edge of Land’ = bleak, depressing and spiteful malice as best delivered by the Americans these days.

Described on the back cover as ‘eleven examples of pure Black Metal art’, the songs carry no titles but are simply listed as I-XI (in keeping with uncompromising BM evasiveness). The first two shots are charming instrumentals, which lure the listener into a false sense of security. The creepy atmosphere is menacing, but strangely comforting rather than overtly hostile. Wind and rain, creaks, acoustic guitar – it’s eerie but we still sense that, as in a fairytale, everything will work out in the end…

…Wrong as fuck. The swirling, droning third track is as unambiguous as a blade in the lower spine, its mid-paced crawl of undiluted pure evil announcing in no uncertain terms that the world is shitty and, no, everything isn’t going to be alright.

‘IV’ begins with a 60-second acoustic strumathon but quickly transmogrifies into another turbulent, hypnotic ode to land and sea – an invocation to the brutality of nature it all its ugliness – before finishing up with more acoustic picking. The songs are predominantly mid-paced and repetitive but the result is a joy to behold. Rather than softening the blow, the relentless acoustic interventions somehow manage to heighten the sheer menace.

Of course, the production is thinner than a butterfly’s eyelids, which leaves the end product totally soul-crushing and ghoulish. The harsh parts on ‘To the Edge of Land’ are of the Nordic-influenced variety, while the add-on of acoustic guitars captures a rustic it-dwells-in-the-deepest-woods ambience that many heralded Scandinavian exports have failed to tap into.

‘V’ is yet another instrumental, replete with wind and water background noises. But the din on ‘VI’ is the total opposite – raw Black Metal with pained shrieks that pierce the psyche and evoke a feeling of emptiness. There is a noticeable symmetry at play in the running order as ‘VII’ is another instrumental paving the way for the album’s emotional zenith, which appears aggressively on tracks ‘VIII’ and ‘IX’ before proceedings close, as they had opened, with two verdant, fertile portions of idyllic instrumentalism, leaving one completely mesmerised, bewildered and beguiled.