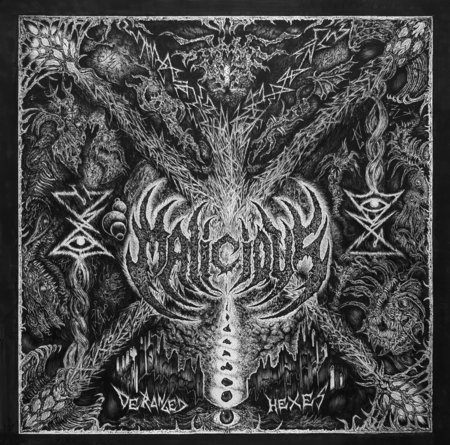 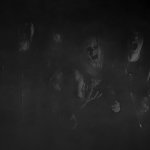 ‘Deranged Hexes’, the debut full-length from Malicious, is a short, sharp shock of barbaric, uncompromising Black / Death Metal, eight hideous, belligerent declarations of war pounding, pummelling, punishing with the intent of a hammer to the face. This is decidedly relentless and nasty stuff, so the particularly brief running time of 25 minutes is probably a blessing as there’s realistically only so much of this aural abuse the ears can take in one sitting.

The pace is unremitting, the violence remorseless as a cacophony of sheer unadulterated fury takes no prisoners. The frenzied storm passes by quickly but leaves a vast trail of damage in its wake. Aptly-titled opening assault ‘Infinite Perdition’ announces emphatically that Malicious are not about to stand on ceremony in delivering their carnage, the ensuing slaughter a chaotic maelstrom of rapid riffs, scorching solos, maniacal drumming and possessed, rabid screams.

Amid the massacre, the Finns do manage to inject some insidious, uncannily crafted groove, such as on the infectious fifth curse, ‘Death Embalmed’, but for the most part the lasting impression is of intense, high-speed malevolence wreaking havoc and impressing greatly in both its execution and unswerving single-mindedness.

Closing with the sick and twisted title track, ‘Deranged Hexes’ certainly isn’t an album to stick on in the background whilst painting a room or reading a book. This is one that will demand your full attention and only those with the ability to withstand a frantic and furious attack on their ear canals should give it a blast. Or, more aptly, allow it to blast them…