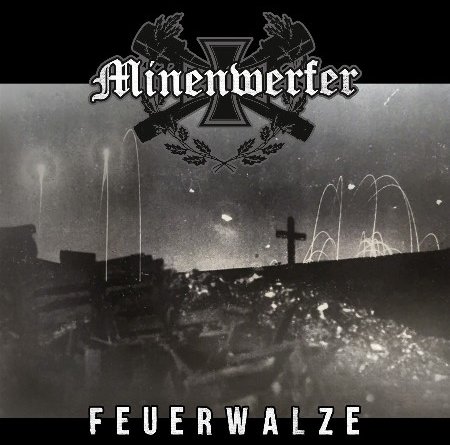 After four years (fittingly) of quiet on the western front, Californian warmongers Minenwerfer return with a fresh and devastating wave of annihilating artillery attacks on fourth full-length ‘Feuerwalze’ – a pummelling 49-minute onslaught of relentless barbaric audial obliteration that perfectly conveys the horror of warfare, the violence of the battlefield and man’s seemingly insatiable appetite for cruelty towards one another.

Mercilessly and poignantly, ‘Cemetery Fields’ opens the campaign amid a deadly barrage of maiming weaponry, scorching fire and acrid smoke mingling with flowing blood, burnt flesh and pulverised bones against a backdrop of furious, bestial riffs, ominous, unforgiving drums and barely human shrieks and screams – the protestations of the soon to be dead. There is no mercy in the trenches, nor nowhere to hide in no man’s land. The title track brings more unbearable violence and the breathless, irresistible eight-minute offensive ‘Eternal Attrition’ continues the bombardment as frontline infantry defences are crushed and the hapless human fodder posted there relieved of life.

War Black Metal has never sounded more vicious but this is not a mindless discharge of sonic violence and aggression just for the sake of it; to the contrary, the musicianship is exemplary throughout and subtle variations of pace and mood heighten the dramatic effect, dovetailing with samples and solos to deliver a wonderfully-crafted and executed nightmare. ‘Nachtschreck’ (night terrors) is a haunting and malevolent offering, the soundtrack to another night raid or perhaps the madness of men living in hell, inevitably soon to be ripped to shreds and off the face of this cursed earth.

With millions of men sent to their deaths, World War I was a wicked and obscene affair. Wars are fought on a different stage today but for sure man has lost none of his rapacious appetite for destruction and utter savagery. ‘Feuerwalze’ represents a brutal reminder of and reflection upon unimaginable atrocities carried out on the battlefields of western Europe not much longer than a century ago. The lacerating, gurgling vocals threaten to steal the show at times but in truth everything about this unprovoked act of war is supreme. It’s consistently strong throughout, with perhaps even the best outrage of all saved ’til last as the drum-and-bass-decorated parting explosive munition ‘Labyrinthine Trench Sectors’ proves a fitting death knell to a strangely-uplifting experience.