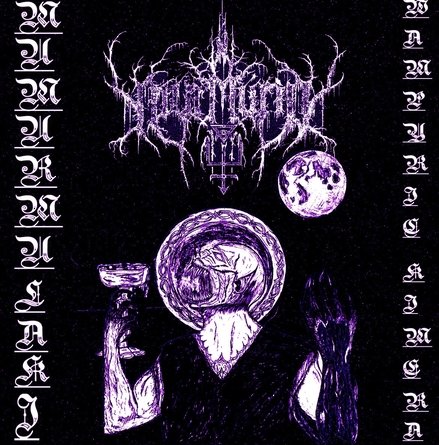 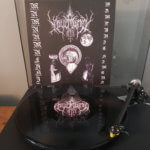 Listening to the second Murmúrio full-length, ‘Wampyric Kimera’, is a decidedly disorientating, discombobulating experience, befitting the times that are in it. The evasive Portuguese horde has been releasing music since 2010 and this is their second album, five years on from limited hour-long debut, ‘Vampyric Stream of Adversity and Ascension’.

Mixing raw Black Metal with dark ambience, Murmúrio is in many respects typically-inaccessible Portuguese insanity, Side A of ‘Wampyric Kimera’ jarring and grating and unhinged like Black Cilice and Abruptum jamming in the same room at the same time. There is no real logic or reason in play.

The lengthy ‘Murmurlaki Wampyric Kimera’ takes up all of the first side and is the sonic equivalent of being drowned in a sea of melted steel. Sounds like it was recorded down there. Any riffs that might exist amid the repetitive swirl of dark murk are barely perceptible, warped by a wall of noise and distortion, the vocals hissed and howled from behind the reverb and chaos, drums resembling anything other than drums.

Comprising four tracks, Side B eschews traditional Black Metal entirely and is essentially a twisted ambient affair, with haunting synth leading the way. If there are guitars involved, my battered ears can’t pick them up. Although I’d prefer to hear some riffs (to be fair, this record would not qualify as Black Metal at all but for the opening track), the haunting and irreverent nature of these offerings is still undeniable and reveals an interesting aspect of a sometimes raw Black Metal act doing things a little differently without shitting in the bed.