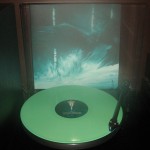 Nasheim’s take on Black Metal is sorrowful, majestic, clean, polished, and über-melodic. If you’re seeking raw and grim, lo-fi aggression, best to look elsewhere. The four epic tracks hereon rarely move past mid-pace and it’s all a bit camp, if truth be told.

With a production befitting Eric Clapton, the gloriously-atmospheric debut full-length arrives over a decade after Nasheim became active and – even though ‘Solens Vemod’ is quite impressive – it doesn’t really inspire me to think or say very much.

A thing of beauty; but where is the fucking beast?