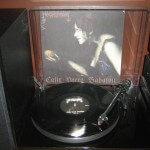 ‘Calix. Utero. Babalon’ arrives a whopping 17 years after cult horde Necromass’ previous full-length, ‘Abyss Calls Life’ – but this is of little relevance or significance to me as I’d never heard of them before. I checked a couple of their songs out and was sufficiently impressed to justify purchasing the record. (In hindsight, I may have acted a little hastily…) The bottom line on this one is that it’s a decent LP but nothing exceptional.

Necromass perform an unspectacular strain of occult Black Metal, not unlike compatriots Mortuary Drape, I suppose. Unfortunately, the occult element is derived pretty much exclusively from the four (admittedly rather great) interludes and instrumentals scattered across the album, with little in the way of variation or true esoterica woven into the actual songs themselves.

And, without the adjoining pieces, the songs in question (literally) are generally run-of-the-mill and uninspiring. In fairness, though, viewed as a whole, this is a solid album. So, sitting on the fence for once, I wouldn’t necessarily advise you to buy this or not to buy it. Just depends on how much spare cash you have hanging around (which I would confidently guess is fuck all…).