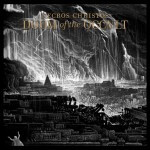 Consistency is a world gone mad: there were 23 tracks on Necros Christos’ excellent debut full-length ‘Triune Impurity Rites’ and there are 23 songs on the stellar, mammoth, sprawling follow-up ‘Doom Of The Occult’. Abacus aside, there’s a world of difference between the 2007 NC album and the current one. The Berliners have become even bolder, braver, more brash … and the results are utterly stunning.

If this isn’t destined to be the best Death Metal album of 2011, then there must be something of orgasmic proportions on the way. Because, believe me, ‘Doom Of The Occult’ is a seismic slab of esoteric Death Metal. Esoteric … strange word that … it’s bandied around a lot in reference to BM acts … but – Gorguts and Nile aside – how often do we hear DM bands referred to as esoteric? Not very often. But it’s a term that describes Necros Christos to a tee. Their music is essentially DM, not a million miles away from Morbid Angel is general feel, but they have tossed so much experimentation and so many twists and nuances into the mix that it’s closer to BM in spirit. DM performed using an adventurous BM template, you could say.

Along the course of the 73 minutes that constitute ‘DOTO’, we are treated to a myriad of captivating interludes, a sumptuous succession of oriental acoustic instrumentation, a dose of majestic mysticism – all of which serves as an ideal counterpoint to the barrage of ferocity that comprises the main body of the work. The real clincher is the manner in which the two faces of NC blend together seamlessly. They can switch from all-out classic Death Metal menace to delicate, hypnotic strumming / tinkering without batting an eyelid and the whole entirety sticks tightly like a hand wrapped around the throat of a tyrant.

This is one of those albums that all fans of Black Metal and / or Death Metal need to own. It’s breathtakingly good and sets a new standard in terms of what DM can be. ‘Doom Of The Occult’ goes to the next level but avoids the pitfalls filled with cheese and manages to stay relevant, sincere and crushingly heavy. Refreshing, honest, and packed with more curveballs than a Coen Brothers movie, this is an instant classic.