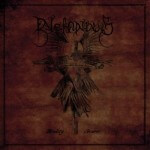 The eighth song on this so-called Black Metal album, ‘Scorn Of The All-Mind’ is a total fucking abomination, one of those embarrassing offerings that shows the band up for the mainstream whores they really are. An aberration. Considering how pathetic it is, there is no point in me saying anything more about ‘Reality Cleaver’, except that you should avoid this one like the plague. Shocking and horrendous stuff; even worse than Watain.

Shame on the band and shame on the label. What the fuck were they thinking?  Fuck me.