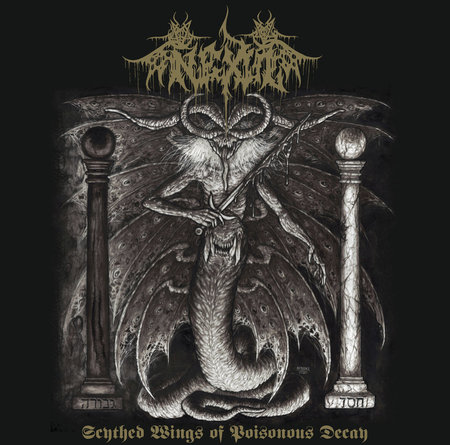 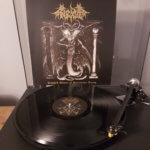 Though modestly granted EP status, ‘Scythed Wings Of Poisonous Decay’ in reality falls into full-length territory as it clocks in at a fairly adequate 36 minutes, Nexul administering a foul dose of sacrificial, unholy blackened Death Metal in deference to Samael, the Angel of Death. There are five new offerings on Side A, supplemented by three vintage spells from the 2013 7” ‘Nexulzifer’ and a medley of Katharsis covers (‘Raped by Demons / Luziferion’) on Side B.

Blasphemy and iniquity spill through the speakers creating an atmosphere of toxic evil and dread, malevolence tangible as this demonic quintet contemptuously summon the all-consuming darkness in His name. It’s precisely the sort of ritualistic, occult decadence one would expect from a coven sharing members with Hellvetron and Nyogthaeblisz.

Phil Kusabs has granted the recording the organic production it merits, masterfully creating that much-desired but often-illusive feeling that one is in the same room as the band, listening to a live rendition of unadulterated Satanic might. While there is (mercifully) nothing overly sophisticated or dramatic about Nexul’s approach, their untamed and undiluted barbarity is expertly executed and frighteningly effective in summoning dark and ghastly energies.

The second side of the record is rougher and rawer than the first – not as immediate as the newer material but nevertheless worthy of being considered more than mere bonus tracks. All in all, the rotten, demonic ‘Scythed Wings Of Poisonous Decay’ presents a malefic mixture of new and old Nexul, both of which are equally hellish and sacrilegious.