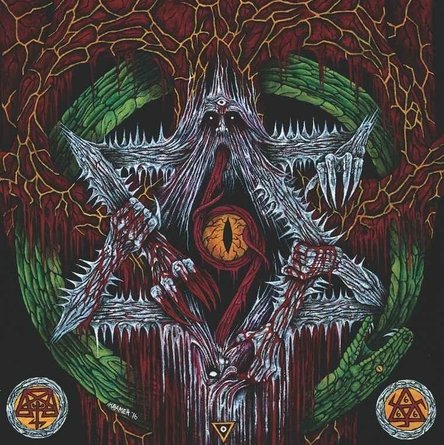 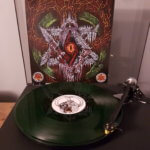 It doesn’t happen too often, but sometimes when I’m listening to a record I begin to wonder am I deluding myself into thinking I enjoy the music. Nyogthaeblisz is one of those bands, because their unearthly emissions are, for want of a better term, absolutely fucking ridiculous. Released on vinyl two days after the birthday of the bearded bastard, debut album ‘Abrahamic Godhead Besieged By Adversarial Usurpation’ does not disappoint in terms of the sheer scale of terror delivered; the mindless, obscene, unpalatable violence pushed through the speakers; the religion-induced revulsion clearly discernible.

Identical twin brothers of Tetragrammacide but even more unpronounceable, Nyogthaeblisz rip through eight cataclysmic eruptions of murderous, hate-fuelled chaos in just shy of 37 minutes, the song titles impossible to remember or understand, the lyrics from another realm of intelligence, an alien terrain of hatred and disgust. Raging against the Abrahamic religions like Revenge on amphetamine, the holocaust is supernatural, unnatural, horrific and nigh on deafening.

It feels like the most excruciating, torturous noises imaginable are hammering into your face, punching your ribs and tearing your children limb from limb. Machines, not humans, are responsible. The frenetic speed of the exchanges render them industrial essentially and one can imagine a horde of gun-toting cyborgs fucking around in a recording studio simply throwing together a random sequence of noisy aggression.

Anything will do. It doesn’t require structure or sense or logic. As long as it’s ridiculous. So why am I listening to this? Why did I pay money for it? Am I insane? Am I imagining that I enjoy this record? Or is it really as brilliant as I believe? I think you know the answer.