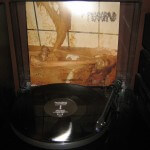 I’ve just listened to this record five times in one sitting (well, ten sittings…) and it’s a gloriously-punishing experience. The band name, song titles and artwork all suggest Death Metal of the gore-obsessed variety and that’s certainly the general tone of Pissgrave’s debut full-length, ‘Suicide Euphoria’.

Yeah this sure is fine.

As well as being heavier than the glistening bones and spilled dung of a million hapless, expired humans, the mangled mayhem of ‘Suicide Euphoria’ also manages to sound unique in its pursuit of all-out savagery and dismemberment. Quite a feat.

In the same way that pain is fun, this is a monstrous record. Real shame no lyrics are included, though, cos it would be nice to read along and see just how depraved the whole affair is.