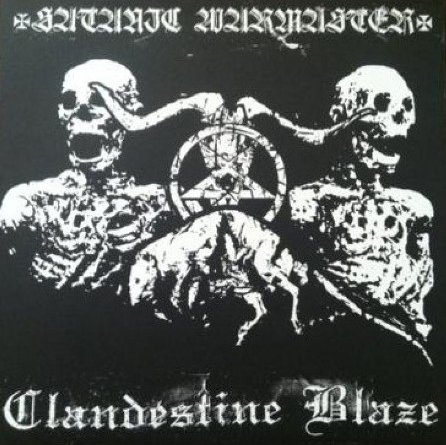 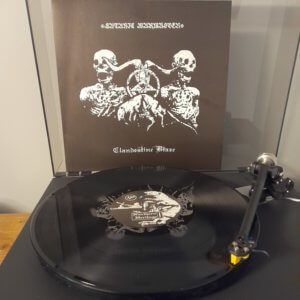 Twenty years ago, Mikko Aspa and Werwolf joined forces to create one of the Black Metal underground’s truly great split releases, although it has to be observed that ‘Clandestine Blaze / Satanic Warmaster’ is more collaboration than split. There’s one CB song on here, and one from SW; everything else is a combined effort from the two infamous, fiendish Finns, with Werwolf on guitars and bass while Aspa takes care of drum duties.

Vocals are shared and what foul emanations and utterances we are treated to! It’s the rawest of the raw and, even though the lyrics are included, it’s difficult to follow along as both men struggle indifferently with their enunciations and syntax in the true spirit of the old underground. There are six curses in total, bookended by an intro and an outro.

The collaborative offerings are on Side A; Werwolf spitting ignorant invectives on ‘My Torment’ and ‘Conspiring Winds of the Abyss’, Aspa alternatingly sounding every bit as depraved and unhinged on ‘Sacrificial Fires’ and ‘Disease’. True to form, as neither man gives a fuck really, the content is suitably uncompromising, nihilistic and unforgiving. On Side B, ‘Guided By Black Light’ showcases the decay of ‘Fist of the Northern Destroyer’-era Clandestine Blaze before Satanic Warmaster beguiles on the epic and screechingly-superb twelve-minute ‘To The Legions’.

Punkish possession and pitch black pestilence abound across the entire duration of this iconic collaboration, which clocks in at three-quarters-of-an-hour and is the very epitome of Finnish filth spewed from the deepest, darkest trenches of the BM underground. Despite the fact that the music was committed to profane perpetuity using only an analog four-tracker with no mixer (and just one microphone), the record oozes class and character. They sure don’t make them like this anymore.