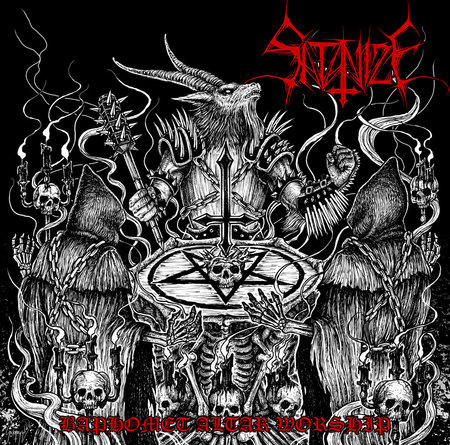 They may have migrated onto a new label but precious little else has changed in the Satanize camp. Sonically, the belligerent Portuguese duo dwell obdurately in the same headspace as hitherto, their sixth full-length, ‘Baphomet Altar Worship’ representing a blistering, barbaric battering of the senses – 29 minutes of bestial, crude and chaotic Black Metal conjured with contempt in the best tradition of ear-assaulting, flesh-flagellating annihilation.

Ploughing through nine spiteful, wrathful profanities in less than half an hour, Satanize do not stand on ceremony, going straight for the jugular on the title track, which opens proceedings in a frenzied, unadulterated barrage of pummelling drums, rapid riffs and caustic curses, scorching and obliterating with malice for a couple of incendiary minutes before ‘Council Of Nuclear Holocaust’ detonates in a similarly frantic and furious fashion.

And so the depravity continues, one hyperblasting, warped Satanic contortion after another, nothing in the way of variety emanating to break up the battery, outside of the brief, hellish intro to ‘Shrine Of Antichrist’, the punishment so severe that one is ultimately grateful that ‘Baphomet Altar Worship’ is so mercifully short. Any more of this utter auditory devastation might prove too much to take.

‘Chariots Of Nocturnal Wrath’ is the musical equivalent of having your inner ears battered with spiked clubs, the aforementioned ‘Shrine Of Antichrist’ following up instantly with a few strategically-placed hand grenades to ensure the damage is both severe and fatal. The onslaught concludes ferociously with the album’s two longest summonings, ‘Luciferian Thrones of Devastation’ and ‘Cavernous Onslaught’, heralding a pulverising finale to a feral, rabid and downright ugly experience.