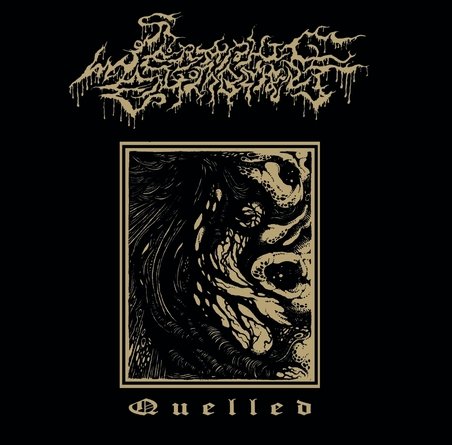 A dose of decay and decadence reverberating through the speakers leaving a stench of death and disease lingering in the air, ‘Quelled’ is the two-track debut demo from Birmingham, Alabama quartet Seraphic Entombment, featuring members of Ectovoid and Hegemony as well as a veritable slew of other bands. Though it’s a decidedly short introduction at 17 minutes long, ‘Quelled’ succeeds in making a lasting impression and indelibly underscores Seraphic Entombment as a force to keep one’s degenerated eyes and ears on for future endeavours.

The songs are delivered at a crawling slow to mid pace, so it’s all about the atmosphere created. Crafting music that doesn’t depend upon speed and violence for impact is a difficult skill but one that Seraphic Entombment clearly have an uncanny knack for. Although the temperature and intensity rise in the middle and end section of ‘Carried By Claws’, predominantly this is a great example of controlled, restrained and highly-skilled Death / Doom with atmosphere and passion.

‘Vault Of Vision’ is first up, ominous and disturbing, its dread and harrowing despair stretched out across ten-plus minutes, a tortured and portentous visitation, hypnotic and incessant as it reveals its ugly face and hammers home its mantra. There’s a feeling of impending pain and death present as this track slowly worms its way into your consciousness, a slow-motion journey to a darkened abyss or cave where no light ever shines and no good will ever reside or occur.

The riffs are sinister and malevolent, the drumming ominous and the otherworldly, monstrous vocals tormented. Negativity and corruption abound, the light at the tunnel’s end non-existent, which seems wholly applicable in this hostile world we’ve been coerced into. While there’s more variety to the pacing of ‘Carried By Claws’, the atmosphere does not lighten. If anything, the second offering is darker, the more forceful chanted howls adding to the unease already generated, the innate catchiness abounding with cymbal crashes and twinkles effectively a dead-cat bounce serving to transmit futility rather than hope. You will celebrate it if you are a darkened soul.