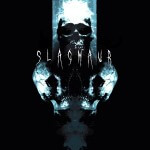 There was so much big talk on the accompanying promo sheet for this one that I was almost ready to dismiss Slagmaur as the Black Metal equivalent of Sigue Sigue Sputnik. However, upon listening to ‘Svin‘ a number of times, I am pleased to report that this album more than lives up to the hype. General Gribbsphiiser’s take on BM is sinister, eerie and decidedly non-linear. More importantly, it is effective and enjoyable.

Though joined in his war against humanity by comrades AtselGribb, Wardr and TKrakyl, Mr Gribbsphiiser is very much the creative driving force behind this rather bizarre entity, whose warped and deluded take on the genre is a joy to behold.

Slagmaur recorded and self-released a trilogy of demos over the course of twelve ridiculously productive months – namely ‘Svin‘, ‘Strekk‘ and ‘Domfeldt‘. The first two were self-released; Black Hate unleashed the third; and the same label has now cleverly seen fit to re-issue the first shot as a proper CD. The only possible drawback is the rather stunted running time (maybe the inclusion of ‘Domfeldt‘ as well would have rendered this thoroughly essential), but still there’s no denying the absolute magic and mystique of these five tracks which stand on their own as something very special.

For once, a band who are more substance than hype. Keep a close eye on Slagmaur. They are doing something different and interesting. Non-conformist, adventurous Black Metal with a twist that doesn’t involve disappearing up one’s own anus. Check it out. Only an imbecile could fail to appreciate ‘Svin‘.