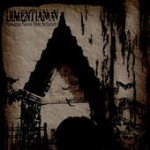 I could waste away the next three minutes of your life by claiming that ‘Hossanas Novus Ordo Seclurum‘ – the second full-length from NY’s Dimentianon – was the most exceptional death metal release of 2008. But what’s the point? The majority of reviews these days overflow with so much gushing praise for even the most average releases that readers have surely learned to ignore the superlatives and take every written word with a bucketful of salt. Thus, we’re left with quite the cry-wolf scenario – what happens when a truly stand-out album lands in our midst? How do we separate it from the comparative crap that we couldn’t resist eulogising over?

Well, put it this way: if you have even the slightest passing interest in death metal and the possibilities of where it might go, then you need to hear this CD. Four years in the making, ‘Hossanas Novus Ordo Seclurum‘ is the sound of a band on top of its game. Dimentianon lovingly crafted over an hour’s worth of incredible grinding death metal with vague blackened tinges, soaring atmospherics, and no fear of experimentation. On this release, they sound kinda like a modern version of Gorguts or Lux Occulta with hints of everything from Napalm Death to Atheist, only better. The atypical moments enhance rather than destroy the work and Dimentianon’s bravery wins the day.

A sprawling tenth track – ‘To Return That Which Is Above To That Which Is Below‘ – provides 20 minutes of pure genius, closing out a rare masterpiece in exemplary fashion. We get a guest appearance from Mortician’s Will Rahmer as well as contributions from members of Biolich, Algol, Laceration and Evol. This is also the best-produced album I’ve heard from Non Compos Mentis, which allows the extraordinary power and depth to surge through like a shiny new boot heading for your front teeth. Fuck it, this is more essential than oxygen. I’d rather lose my balls than even contemplate never hearing ‘Hossanas Novus Ordo Seclurum‘ again. It has given me a reason to live. This album should have changed the face of extreme music as we know it. (If you can’t beat them, join them…)

Seriously though, from the artwork and intelligent lyrics through to the composition and delivery, everything about ‘HNOS‘ carries a stamp of pure class. To not own a copy of would be very foolish indeed.