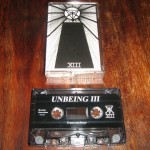 There’s so much to recommend about Unbeing’s third demo cassette that it’s difficult to know where to start. This is one of those releases that I quite simply had to buy because of its place in Norwegian Black Metal history. I’m glad I bought it but actually don’t think I’ll be revisiting it too often, to be honest.

The product of a genuine underground entity from Norway, ‘Transcendence’ comes as a pro-tape and will set you back just €6. It contains only one song, which clocks in at somewhere in excess of 20 minutes (I didn’t time it) and that same tune is featured on both sides. So, if you have a trendy tape recorder, you can listen to it twice in one sitting!

Unbeing once featured the talent of one Steingrim Torson (R.I.P.), but Sarath stood in to assist the eponymous mainman (i.e. Unbeing) on this third and final chapter in the band’s short but intriguing history. The song itself is droning and sludgey blackness rather than Black Metal and I suppose it is kind of transcendental and mystical in a way. But – as well as being inexpensive and poignant –  ultimately, ‘Transcendence’ is also boring.