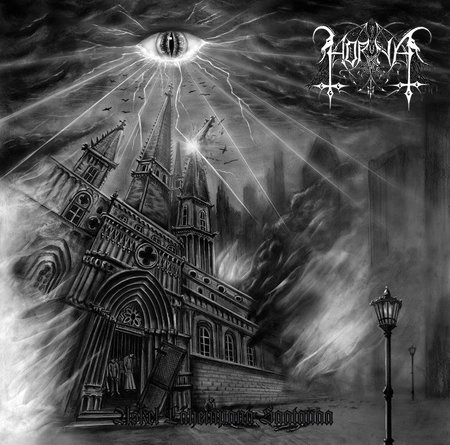 Thank Satan for Horna. The Finns are one of those bands you can always depend upon to consistently deliver solid albums and eighth full-length ‘Askel Lähempänä Saatanaa’ is yet another worthy effort from Shatraug and his unblessed partners in grime. The integration of new vocalist Spellgoth into the camp is a possible talking point but let it be known that there is no radical departure from the tried-and-trusted Horna formula (well, not as far as I can detect, anyway).

Horna have kept the bar remarkably high for the last decade-and-a-half, releasing one quality LP after another. My own personal favourites have been ‘Envaatnags Eflos Solf Esgantaavne’ and ‘Ääniä Yössä’ but I can honestly say I’ve never stuck on a Horna record or CD and thought ‘this blows’ (although, to be fair, ‘Sotahuuto’ was far from a classic).

An excellent production lets every note blaze through from the netherworld and a tasty inlay on the vinyl edition supplements an already-fantastic release.