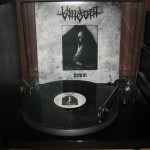 This record contains the four songs from Vindorn’s ‘Hrana’ MCD on Side A plus four bonus tracks from sole member  N.’s side project Wandering on the flipside. First thing I should point out is that the Wandering offerings are every bit as shite as the band name suggests. The third of these – ‘Eclipse I’ – is particularly terrible, with some clean vocals that border on the obscene (as all clean vocals do). ‘Eclipse II’ isn’t much better.

On one hand, I possibly shouldn’t be too severe as these are bonus tracks. On the other, they aren’t bonuses in the truest sense of the term as the running time without them is a mere 21 minutes and the record costs the full price of a standard full-length… Hmmm.

While I am going to totally write off Side B (utter rubbish), I must admit that ‘Hrana’ itself is reasonably good, without ever being brilliant. Although it is painfully uninspiring and largely uneventful for the most part, there are some nice touches on Side A – even if it is ultra conservative, unbearably safe, lacking in pace or dynamic and oftentimes offensively melodic. It could put you into a coma but probably won’t.

To be honest, the main body of work here doesn’t really move me in any way. Either positively or negatively. It just is. So I suppose it’s a non-event (on the opposite side of a decidedly shit event). Nice cover, though.