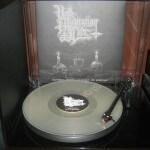 Technically, ‘Sulfurous Prayers Of Blight And Darkness’ is a split LP; effectively – as it features contributions by what are essentially two incarnations of the same (one-man) band – it isn’t.

Side A of the record contains the four songs from Void Meditation Cult’s 2011 demo ‘Sulfurous Prayers’, while Side B is graced with the much-rawer four-track 2009 ‘Blight And Darkness’ demo, which was released under the rather-embarrassing, almost-illiterate handle of Sperm Of Antichrist (the erstwhile moniker Desolate Defiler operated under briefly prior to opting for a well-advised name change that same year). Confused? Me fucking too.

Normally, I wouldn’t condone a change of name mid-stride but, seriously, who wants to be known as Sperm Of Antichrist for any longer than a few minutes? Anyway, the befuddled history lesson has kind of thrown me off the scent, so let us move on to the news…

In terms of the actual music on here, suffice to say that ‘Sulfurous Prayers Of Blight And Darkness’ contains some nice, evil, deathly Black Metal, kind of like a less-immediate Demoncy or Grand Belial’s Key or Encoffination even (with some ambient Darkspace-ish moments included, too). Formulaic it may be – with many songs boasting creepy intros / outros, for example – but it is a winning formula in most respects and, by and large, this is a truly superb record that was well worth the investment.