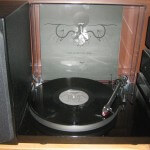 It’s been a decade since Blut Aus Nord’s fourth full-length redefined what Black Metal is and can be. When it arrived from slightly left of nowhere, ‘The Work Which Transforms God’ represented an innovative, refreshing and invigorating voice within a scene that was starting to stagnate alarmingly. Ten years on – and now available on sacred vinyl for the first time – these songs still sound absolutely monumental.

To my ears, this stunning album is undoubtedly Vindsval’s finest (and defining) hour, the crowning glory thus far in one of the most inspirational recording careers in Black Metal history (and unlikely to be matched). ‘TWWTG’ is an epiphany for BAN, a modern portrait of urban decay and human decadence, a recording which sent the irresistible French force off on a twisted new tangent that has been reaping rich dividends ever since. The template.

For this sumptuous double-vinyl edition, DMP has pulled out all the stops to deliver a beautiful set of records that adequately does justice to a peerless album that’s every bit as enjoyable as it was ambitious (nothing else sounded anything like this in 2003!). A rare feat that, as in most cases ambition is synonymous with bullshit.

Boasting new artwork, this anniversary edition looks and feels as awesome as it sounds and a great bonus track is thrown in for good measure. Damn, there’s even some sort of drawing inside(!) the fucking gatefold sleeves – where the records sleep. For digital fans, this reissue is also available on limited-edition CD. So everybody should be happy. Supreme!