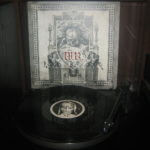 Whoredom Rife is the latest Black Metal buzzband coming out of the legendary Trondheim underground and they have found a fitting home on Terratur. The self-titled debut mini-album comprises four tracks, spanning 22 minutes, and is presented in a gatefold jacket with a big poster included. So, a lot of padding for a glorified EP… Looks fabulous but the presentation is something of an overkill when each side of the record ends so quickly.

Leaving aside the brevity of proceedings, musically ‘Whoredom Rife’ is a decent enough dose of reasonably-aggressive but predominantly-melodic and catchy Black Metal that’s somewhat enjoyable but a long way from the mandatory acquisition I was braced for when I chose to cough up the cash.

You could headbang to this all day long. Hell, you could even dance about the place to it if you are that way inclined, but that’s not really what I’m seeking in my music. I’m really hoping the full-length – which is due to be released literally any minute now, apparently – will be a considerable improvement because this is a run-of-the-mill, underwhelming record (albeit, a fantastic-looking one).