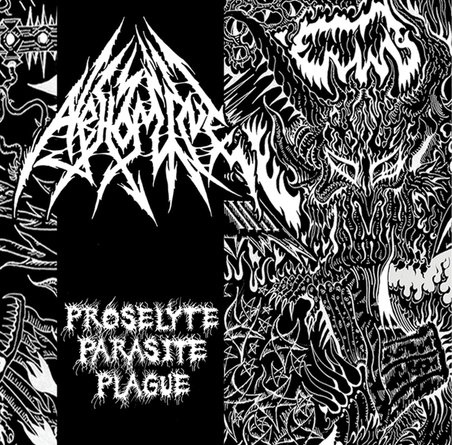 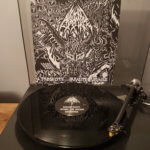 Veteran wreckers Pete Helmkamp and Cazz Grant condense an unmerciful barrage of violence into 23 minutes on Abhomine’s brief but enduring second full-length, ‘Proselyte Parasite Plague’. Like a boot to the testicles, it may not last long but it stays with you for quite some time. Featuring both riffs and vocals that sound like razors cutting through limbs, this is not the most comfortable listen you’re going to encounter. Thankfully.

Helmkamp knows a thing or two about bringing the pain, boasting a history of violence that not many others can match (Angelcorpse, Revenge, Order From Chaos, Kerasphorus) and his searing guitars and scorching, rabid vocals have never sounded better than hereon, while his Abhomine acolyte, Grant, AKA The Black Lourde of Crucifixion – the man who was drummer and vocalist on Grand Belial’s Key’s first two landmark albums, ‘Mocking The Philanthropist’ and ‘Judeobeast Assassination’ – serves as the perfect foil, adding demonic growls and pummelling drums to deafen the dead.

Born within a couple of days of one another and sharing 100 earth years, the stalwarts behind Abhomine have nothing to prove to anybody and, as such, clearly make music to satisfy their own cravings, ‘Proselyte Parasite Plague’ essentially an exercise in mindless violence, a purging outburst of hatred, disgust and revulsion that hammers and hammers and hammers its message home.

Six cuts of perfectly-crafted and contemptuously-executed Black/Death Metal later, it’s all over and you should have time to give it another listen and wallow all over in the simmering, straight-to-the-point, white-knuckle disdain.