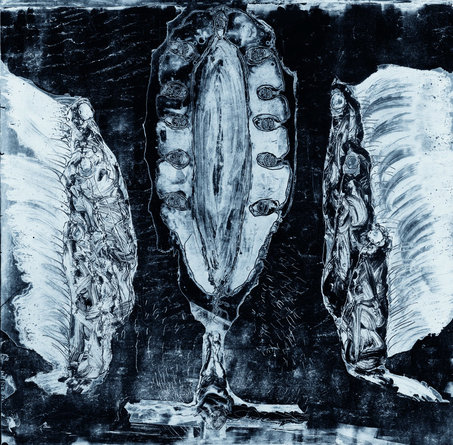 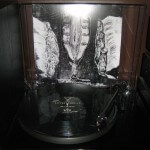 Shortly after ‘Through The Cervix Of Hawaah’, Antediluvian conspired with their compatriots Adversarial to deliver the exceptional split album that is ‘Initiated In Impiety As Mysteries’. The record contains only three songs from each band and boasts a running time of less than 28 minutes, yet it’s still one of the best split albums you’re ever likely to purchase.

The offerings from Antediluvian are every bit as amazing as we’ve come to expect from this awesome anti-music entity. Indeed, it might not be a stretch to suggest that ‘Force Of Suns Of Adversary’, ‘Dissolution Spires’ and ‘Ehyeh Asher Ehyeh (I Am That I Am)’ rank right up there with the very best material they’ve ever recorded (and, believe me, that’s saying something!)

I’m not otherwise familiar with Adversarial and I’m not sure what they normally sound like but here they give Antediluvian a real run for their money with a similar brand of guttural, lo-fi, inaccessible Death Metal disharmony. In many ways, this is almost like an Antediluvian MLP, so similar is the vibe and attitude on both sides.

Released last summer, ‘Initiated In Impiety As Mysteries’ is by no means a new LP but is still readily available and is well worth checking out.