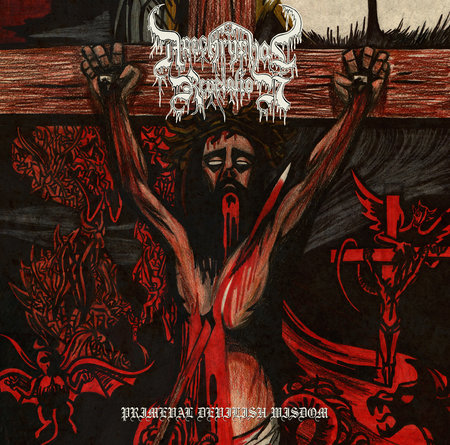 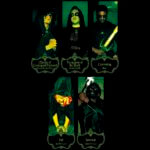 If ‘Primeval Devilish Wisdom’, the sophomore full-length from Apochryphal Revelation, doesn’t bring even a faint curl to your lips then it is likely that you are destined to never smile or feel happiness again. There’s three-quarters-of-an-hour of blasphemous, nostalgic Christ-scorning Black Metal to be found hereon and it really is highly enjoyable stuff.

The music is carried on a dirty old-school vibe of ancient evil, swirling twisting riffs and raspy, guttural vocals joined by a straightforward rhythm section, mid-paced malevolence for the most part seeping like dust and poison through the speakers, the urge to throw a goat horn or two never far away. The music is atmospheric but also has a quite cavernous production.

What elevates the album to another level for me is the interludes between Apochryphal Revelation’s crude, devilish deliverances. ‘Death Of The Savior’ followed quickly by ‘Poisoned Blood Of The Redeemer’ paint a particularly profane picture of mockery and hilarity that is captured too on the delightful cover artwork.

‘Mother Hecate’ represents the soothing calm before the fizzing storm that is ‘Burning’ while ‘Dismal Depths’ and the closing ‘Dreams Of Beyond’ further highlight the band’s ability to conjure dark but catchy little instrumental pieces. The title track / intro is also an instrumental, this one organ-driven. Indeed, it isn’t until the third song, ‘Profane’ that we witness any vocals at all. While the meat and bones of ‘Primeval Devilish Wisdom’ may to some extent constitute standard-issue occult Black Metal, the variety offered by the numerous instrumental pieces certainly make it more interesting.