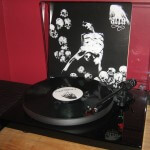 Atra is a one-man vehicle steered by aptly-named former Drowning The Light ghoul Blackheart, whose second thoroughly-underground full-length has been immortalised on wax by a small but commendable label that I otherwise know little about. Limited to just a hundred copies and boasting the most non-commercial feel, sound and vibe imaginable, ‘In Reverence Of Decay’ is right up my street / sewer.

It’s quite a short album, with just seven tracks plus the requisite intro and outro to fatten things up a bit but you won’t really notice because somehow the songs seem to last longer than they actually are. That’s because there’s a lot going on beneath the murky surface, so much darkness seeping through the speakers, so much ugly, twisted, raw Black Metal malevolence; you’ll be too busy wallowing in the smouldering filth to detect the passing of time or otherwise.

The songs are executed in a lo-fi manner, with the sound wibbling around all over the place at times, everything on the cusp of chaos but remaining just about under control. While the vocals are far from spectacular, they are sort of buried in the mix in a very cool way. In fact, everything’s buried in the mix. Thus, when it all breaks through in a bleak cacophony, it sounds like the early ‘90s all over again. Like when Black Metal was dangerous. Ish. This record brings me down memory lane but it also serves up music that’s bizarrely refreshing, new and different.

In a word, this is brilliant. Not that I really need to recommend it at all because the sort of people who seek out and purchase a release like this know exactly what they want and nobody who buys the decrepit, sludgy blackfest that is ‘In Reverence Of Decay’ will regret doing so. Still, thought I’d let you know anyway…