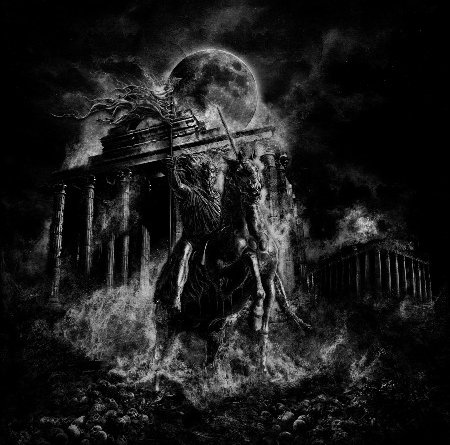 Autokrator’s harrowing and horrific fourth full-length presents 34 minutes of suffocating Death / Black Metal (with scant traces of doom and noise) exploring once more the darkest corridors of the malignant, malevolent human psyche. Documenting the barbaric atrocities visited upon Christians during the height of the Roman Empire – when the unacceptable transgression of refusing to acknowledge the omnipotent sovereignty of Caesar was punishable by a whole host of dire consequences, including decapitation, hanging, beating, scourging or being thrown like offal to the lions – ‘Persecution’ is Autokrator’s most grotesque offering to date.

And that’s saying something as this is a band that has never shied away from casting a light on the ugliest aspects of humanity, with lyrical inspiration invariable drawn from real-life horrors. Conceptually, their second full-length, ‘The Obedience to Authority’, was particularly disturbing / sobering / thought provoking and this one is right up there…

Throughout history, there has existed a never-ending quest for power / control and a relentless crusade to oppress the non-compliant; this applies not just to the most notorious bygone empires and regimes but also to practically every so-called democracy. Thus, the contemptuous commands of ‘The Great Persecution’ – “Kneel! Obey! Confess! Submit! Repent! Relinquish! Renounce! Concede! Surrender! Serve! Bow down! Venerate! Worship!” – could just as easily roll off the tongue of a shamelessly totalitarian Macron, Trudeau, Andrews or Biden as Diocletian, Hitler, Stalin or Zedong.

There is something inherently sick, twisted and cruel about mankind (we have developed devious ways of torturing and humiliating one another that no other animal could dream up) – and this is impeccably reflected on ‘Persecution’, where the period (re-)visited provides a visceral example of our bloodthirsty primitivism. Dealing with unimaginable torture and suffering, the six-track album has been crafted in such a way that it needs to be digested as a whole. Flowing organically from one song to the next, here is a recording comprised not of separate tracks but with a clear beginning, middle and end.

From the pulverising intensity of the opening onslaught ‘De Gloria Martyrum Et Confessorum’, through the expansive, dynamic and utterly crushing ten-minute ‘Antechristus’ and culminating in the two most experimental songs, ‘Caesar Nerva Traianus’ and ‘Apocalypsis’, Autokrator injects many shades of darkness into ‘Persecution’, the atmosphere always stifling, unsettling, overwhelming. Delivered with militaristic precision and tribal spirit, Kevin Paradis’ drumming beats and blasts an ominous mantra across proceedings, perfectly complementing Loïc Fontaine’s wretched, frenzied riffs and David Bailey’s inhumane roars from beyond. The execution matches the uncanny creativity, resulting in a truly infectious work bursting with musical prowess, memorability and an endless sense of dread.