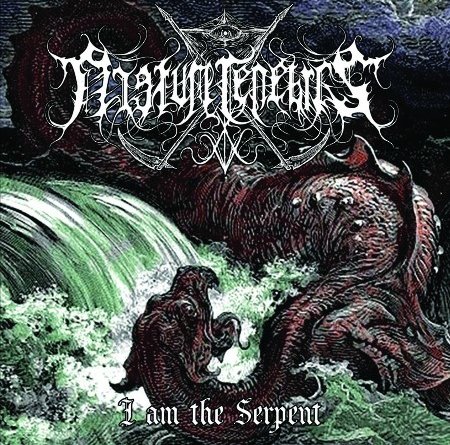 Traversing a barren, abandoned landscape, Nigrum Tenebris delivers a bleak and desolate blast of negative, adversarial Black Metal on abhorrent debut full-length offensive, ‘I am the Serpent’. In the best tradition of seminal Black Metal from the early ‘90s, there is an icy chill permeating the music, which is imbued with the foul stench of indifference and hostility. Contempt for humanity is the order of the day here and no anti-life dogma is considered sacred.

Journeying unapologetically back through time to an erstwhile era when Black Metal was roughly hewn from the all-prevailing darkness, where the atmosphere conjured is deemed paramount, ‘I am the Serpent’ is something of an anomaly in today’s oftentimes over-produced, over-processed, over-elaborate, over-thought scene. By eschewing modernity and technicality, the Germans have crafted a truly hateful, spiteful offering of distant, grim Black Metal, with the added charm of some throwback, classic broken-English, grammatically-dubious lyrics.

The rather bizarre first track proper ‘The Beauty of Suffering’ stands out most in this regard, graced with a strange and twisted narrative where disdain and derision are never far from the surface. Musically, Nigrum Tenebris hammers out disordered, chaotic and seemingly-unrehearsed demo-style old-school Black Metal with freezing riffs, casket-lid drumming and disgusted utterances of the damned …  a combination we have encountered many time before but which never becomes stale. If you are seeking some pioneering reinvention or a new twist on the tried-and-trusted formula of ancient Black Metal, look elsewhere; ‘I am the Serpent’ venerates the majesty and ugliness of the subgenre’s unsophisticated and unpolished founding principles.

Ridiculing religion and mocking existence, Nigrum Tenebris is a nihilistic, scornful entity, championing strength and indulgence through independence. Gustave Doré ‘The Destruction of Leviathan’ adorns the front cover, a fitting image to reflect the onrushing storm. Examining the most self-defeating superstition of them all, ‘False Prophets’ outlines the folly of blind faith, the preposterous compromise of placing one’s hope in the hands of a non-existent, fabricated weakling. ‘Spit to our Creeds’ is a venomous attack on all religious fallacy (“I tear out the eyes of Jesus, I smash the ugly face of Mohammed, I rip the flesh from the bones of the Jahwe, and I step down the spineless Buddah”), ‘Ode to Nothingness’ a suitably downbeat denouement, celebrating the meaningless of everything and longing for the death of all living things. The world will be better without us.