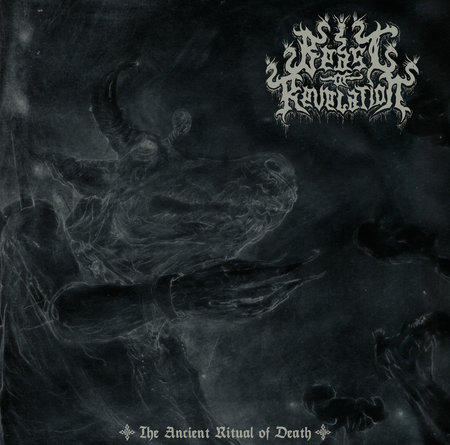 Beast Of Revelation are in no hurry whatsoever with their slow, crushing Death / Doom. It’s premeditated, calculated, deliberated; death by a thousand riffs. Why rush it? Slowly, ominously, meticulously … that’s the best way to crush. With a trio of certified Death Metal veterans at the helm, ‘The Ancient Ritual Of Death’ is an exercise in restraint, patience, control – a trudging journey that will bring you to despair. If you’re not already there.

Dutch veterans A.J. van Drenth (guitars, bass) and Bob Bagchus (drums) have been involved in a veritable plethora of Death, Doom and Black Metal bands over the years, decades even (Bagchus being a founding and long-time member of the mighty Asphyx), while vocalist John McEntee should need no introduction. Here, the Incantation legend shows why he has deservedly earned a reputation as one of Death Metal’s most iconic vocalists. Bordering on funeral doom, he sounds perhaps more demonic and possessed than ever.

So, with three experienced, well-known and highly-regarded extreme metal musicians coming together to form a new band in the autumn of their careers, focussing on slow-paced, portentous Death / Doom, the handbrake pulled so tight their knuckles are white, the question might reasonably be asked: is this album an indulgence? It crossed my mind briefly. However, once I gave ‘The Ancient Ritual Of Death’ a proper listen, it quickly dawned on me that it is in fact a superb record that more than justifies its existence.

The riffs are plentiful and meaty, the drumming precise and perfectly placed, the vocals not those of a man but a diabolic entity. Almost like a slowed down Autopsy (or Incantation), unnervingly guttural and oppressive, the songs strike like sledgehammers swung in slow motion, the protagonists stubbornly resisting the undoubted urge to let the shackles off. In truth, this is a surprisingly unusual album due to its subdued pacing and insistence on not doing what one might expect, but it’s one I really like.