To the growing list of wondrous Black Metal acts to emerge from the cold plains of Québec, add Sombre Héritage. In awe of the delights delivered by captivating debut album ‘Alpha Ursae Minoris’, I reached out to lone wolf Exu to glean further details… 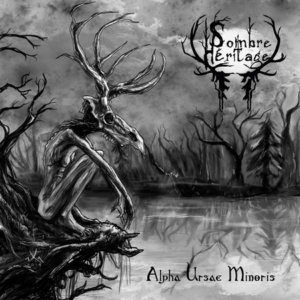 ‘Alpha Ursae Minoris’ is a triumphant, inspirational album. It’s harrowing on one level but also full of pride and hope. I don’t like to pigeonhole music too much but it does appear to fit in very well with the whole Métal Noir Québécois aesthetic which has been promoted by Sepulchral Productions for so many years. Was it your vision on this recording to create music that is purely of Québec sound and origin?
“I create music for myself. If people can connect to it, that is nice. I composed the basic riffs for ‘Polaris’, ‘Nature Souillée’ and ‘Déchéance’ before I joined Hak-Ed Damm in 2008. Of course I have since added some maturity for the release. So, I have had this project in mind for several years and finally it is taking shape. I guess it fits very well into the whole Métal Noir Québécois, but I don’t consider Sombre Héritage as such. Métal Noir Québécois is a concept about Québec folklore and patriotic acts. I don’t talk about this in my lyrics. However, it is primordial to me to write in my mother tongue. This is something to be proud of and I think that is a common thing among bands promoted under the Sepulchral banner.”

A yellow supergiant six times the mass of our sun and located 323 light-years from Earth, ‘Alpha Ursae Minoris’ is the scientific name for the North Star, Polaris. Traditionally, it’s an important star in navigation as it always remains in the same place in the night sky. What attracts you to this star and why did you choose it as the theme for your album?
“Like you said, Polaris is an important star in navigation and in tradition. I feel today we have become disconnected from nature. Our forbearers shared the same vision of the sky and understood it very well. We don’t bother to observe the sky at night; instead we keep our heads down looking at our cell phones. Ancient knowledge is fading or has already disappeared and I think this is something troubling. We’ve lost the connection that binds us to nature due to our egos, our abuse of power and money. So I chose that to reflect the way we evolve, the same as we don’t know how to be guided under the Polaris star.”

Do you study astronomy in general? If so, what is it that you find so fascinating? For me, when I think about the immensity of the cosmos and how many planetary systems and universes there are out there, it makes me feel very small and irrelevant…
“I try to understand how nature and the universe work. When you go against it, somehow, you will pay the price. It’s fascinating how it is so simple, but also very complex. Take the atom, it’s microscopic, but in a way, it looks like a solar system… ‘as above, so below’.”

Everything in the universe came from stars. I find it amazing that there are active nebulae up there in the process of giving birth to thousands of stars. One of these, the Orion Nebula, which is located inside our own Milky Way galaxy, is visible to the naked eye. It’s just a blur but it’s incredible to gaze at it and wonder what’s going on all around us. It’s also an honour to stare at the same sky that virtually every living human in the history of our planet will see…
“Yes, indeed, the universe still has plenty of surprises and mysteries. This has always raised questions about the nature of our reality – in the past will also do so in times to come.”

How are things in Québec right now? I guess you could never have imagined that you would be releasing the first Sombre Héritage album during such unusual times?
“Indeed, it is an unusual time. I got stuck at home for two months. Slowly things are moving forward, we are in a process of de-confinement. The release date of the album has been extended a little. Unfortunately, Myrkhaal of Sepulchral Productions was on tour in Europe with Miserere Luminis and Délétère. They had to come back sooner than planned. So, we’ll prepare everything for the release and just watch and adjust with the situation. He has set June 24th to be the release date, right for our Québec National holiday, the Saint-Jean-Baptiste.”

Unfortunately, Québec – perhaps due to its proximity to New York – has been particularly hard hit by the novel coronavirus pandemic, with more than 60% of all Canada’s deaths recorded in the province. Has it been a difficult time for you personally to witness this suffering? And, from a musical perspective, have you been able to draw some inspiration from it?
“It is sad, but we forget the virus is part of nature and it has a role to play. It is more how humans may react that bothers me. I don’t really get inspiration from it, but I use my free time to create some new riffs. I am the most effective when I am angry or upset (en tabarnak). I just focus that energy and let it go on my guitar. That’s the way I transfer my emotion into the music. So, yeah, I guess indirectly this situation has given me the opportunity to put the basics together for six new songs.”

Slowly, things will return to normal and Québec will rise again. The things we once took for granted are what we now aspire towards…
“Things are always evolving. We live in a weird time where situations can change really fast. It was an opportunity to review our way of life…”

Sombre Héritage differs significantly from the war-themed approach of your other band, Hak-Ed Damm. Clearly, you are interested in a lot of different styles of Black Metal. What bands outside the Québec scene do you enjoy? I’m going to guess that Marduk is one… Also, is there any other interesting new music emerging in Québec at the moment
“You guess right; once we shared the stage with Marduk and that was a big accomplishment for me. I have listened to Black Metal for almost 20 years so, yeah, I’ve touched a lot of Black Metal. Musically, I like to perform different things, it annoys me when you always do the same. The most important bands are the ones you can connect with and have a feeling with. I find that in Mgła, Gaahls Wyrd, Misþyrming, Lifelover and the list goes on… We have a great scene here. There are many bands here that deserve to be discovered such as Nalzer, Spectral Wound, Atroce, and many more.”

Has the lockdown given you the time and opportunity to create some new music? I think we might be hearing a lot of great Black Metal from all around the world over the next six months or so!
“I am sure of it. Like I said, during the lockdown, I developed the basics for six news songs. I especially can’t wait to have access to my practice room and edit the new stuff with Silencer on the drum.”

One of the downsides of restrictions and the disruption to everyday life is that gigs have been largely cancelled worldwide. In Québec, Messe des Morts is the mandatory annual gathering. This year’s event is slated for November. There’s still a little time to play with but it seems increasingly likely it may have to be cancelled…
“Yeah, it sucks. I don’t know if it will happen, but let’s hope.”

Finally, I’ve mentioned Sepulchral Productions already. The label is synonymous with Black Metal in Québec, going right back to that very first Frozen Shadows album. You must be very proud that Sombre Héritage has now joined that great legacy?
“I am very proud to be a part of that legacy; it’s a good springboard for Sombre Héritage.”