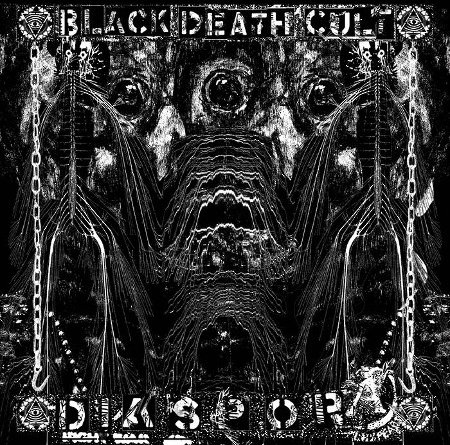 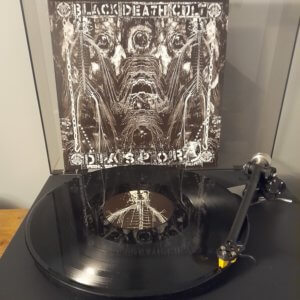 Black / Death Metal doesn’t get much more surreal and out there than Black Death Cult’s frankly deranged second fantastical full-length, ‘Diaspora’, which delivers 38 minutes of the strangest sounds you are going to experience this side of the inevitable and impending AI takeover. Nightmarish, ghastly and otherworldly in the extreme, here is a twisted recording that may not have been crafted by Human 1.0 at all.

Starting with the ridiculously fucked-up and warped vocals: from the moment Rephaim Specter (AKA Antediluvian mastermind Tim Grieco / Haasiophis) first assaults the ears with utterly inhuman utterances on unnerving opening experimentation ‘Neon Cross’, it is obvious that there is going to be nothing orthodox about ‘Diaspora’. And so it continues throughout the six perverse profanities proffered via a barely-believable litany of gurgles, grunts and regurgitations, screams, screeches and shrieks. Glorious insanity.

The music (expertly crafted and executed, of course – and that drumming seems very familiar) too is completely unhinged. Almost in a psychedelic, trippy, unravelling way. It feels like everything is out of sorts as Black Death Cult work their way indifferently like cyberclones through the soundtrack to lunacy and collapse. The template of Black / Death Metal (if one exists) has been deconstructed and pieced back together by electronic alien fiends with no consideration for convention, compassion or conformity.

At this stage, Black Metal and Death Metal have probably pushed all the boundaries in terms of what can be achieved through aggression and speed, but the possibilities arguably remain limitless as to what can be conjured via truly inspired madness, mania and creativity such as that demonstrated by Black Death Cult on ‘Diaspora’ – as bizarre, phantasmagorical and exhilarating a recording as one is likely to encounter.