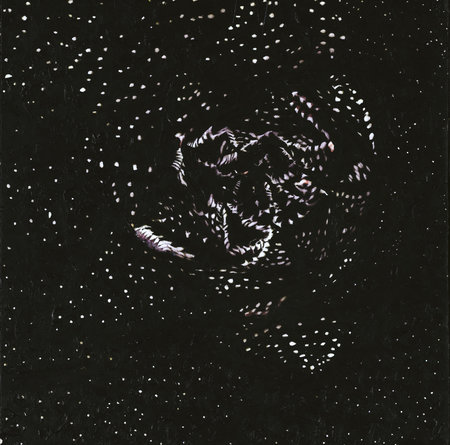 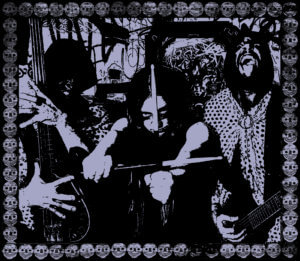 It has been a frustratingly-long wait but eight years on from ‘λόγος’, Antediluvian have finally delivered their monstrous, depraved third full-length, ‘The Divine Punishment’ – a virulent swarm of twisted black deviancy that serves as a potent reminder of what we’ve been missing. The band had been placed on indefinite hiatus as Mars had emigrated to foreign shores but her return to the fold cleared the way for an ominous resumption of hostilities, hinted at on ‘Defleshing The Serpent Infinity’ and now culminating in this utterly crooked conjuration, comprising eleven odes to decadence and clocking in at a generous, devastating 66 minutes.

‘Obscene Pornography Manifests in the Divine Universal Consciousness’ kickstarts proceedings – ten minutes of prime Antediluvian sickness proving immediately that the Canadians are on top of their game – bestial, ravenous, awash with carnal corruption and nasty, nightmarish overtones. The contorted, discordant and unnervingly-extraterrestrial riffing of ‘All Along the Sigils Deep’, complemented by trademark death drums and Haasiophis’ ghastly and ghoulish profanities, project disharmony and disquiet through the speakers, ‘How the Watchers Granted the Humans Sex Magick in the Primordial Aeon’ erupting with pulverising potency, a maelstrom of malevolence and also the first indication of a somewhat more varied and experimental approach, interspersed with haunting, druid-like choirs that serve to amplify the inexorable sense of pure evil and dread. While the album as a whole is drenched in the sickest juices of perversion, this offering is particularly harrowing and unsettling – a lurid, grinning soundtrack to sacrifice and despoilment of the flesh and undoubtedly one of my favourite Antediluvian songs ever, elevated to another dimension entirely by tribal tattooing drums and alarming lead guitar sirens.

As ever with Haasiophis’ creations – be they visual or sonic – abstraction is to the fore and there is a genuinely ethereal, otherworldly or intangible nature to the music. I’m not sure what the instruments being deployed on ‘Guardians of the Liminal’ are but this is one warped and demented soundscape – again somewhat experimental and unexpected but totally magnificent. Antediluvian’s voice has always been a unique and peerless one so it seems fitting that they should choose to embellish it now with extra layers of insanity.

‘The Divine Punishment’ is the gift that keeps on giving, with so much variety,  diversity and dynamism injected into its body that more and more madness is revealed with each repeated listen. Ultimately, it is crushing and overwhelming as all good music should be, often as punishing and uncompromising as the most bestial Black Metal and devastating Death Metal with the added filth and violence of grind (‘Sadomaniacal Katabasis (Last Fuck of the Dying)’ just makes it past the minute mark).

The churning, provocative ‘Tamasic Masturbation Ritual’ is another highlight, as is the cosmic mastery of ‘The Liar’s Path’, while ‘Temple Prostitute’ and ‘Circumcision Covenant’ are so completely fucking deranged that I’m almost wondering should I send Tim an email to see if he’s okay. He’s not, of course. Gloriously decadent art like this can only be wrought from the most fractured and tortured of minds. I’ve always known that Antediluvian was something special but they have really surpassed themselves here. Immersive, annihilating and mercilessly enduring, the album is given a suitably soaring denouement in the form of the chaotic, restless black-hole detonation that is ‘Winged Ascent unto the Twelve Runed Solar Anus’. ‘The Divine Punishment’ is precisely that – divine and punishing. You’ll need a cold shower followed by a tranquilizer to recover.