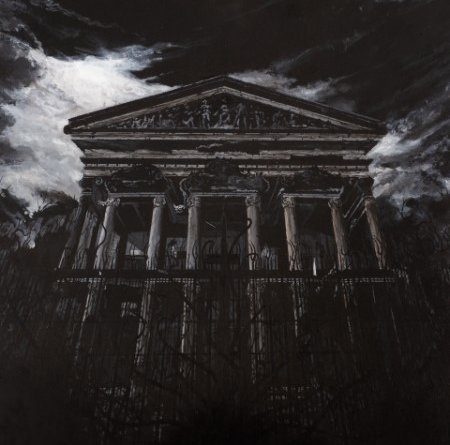 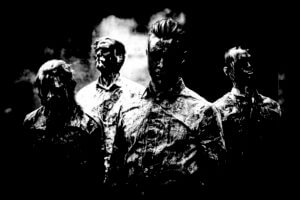 Contemplating the essence and linearity or otherwise of the glass-ceiling-breaking third Misþyrming full-length ‘Með hamri’, Jean-Baptiste Alphonse Karr’s oft-quoted observation about things remaining the same the more they change springs to mind. As they did in the bold and brave leap from ‘Söngvar elds og óreiðu’ to ‘Algleymi’, Misþyrming have once more refined and re-engineered their approach to conjure a varied volume of work that is paradoxically far removed from their previous releases yet at the same time perfectly aligned with them.

The iridescent, spangled and soaring second offering, ‘Með harmi’, harks back majestically to the infectious melodicism of ‘Algleymi’ – but only after the blackened-to-a-crust propulsive title track has first ripped venomously and vitriolically through the ether in an unexpected eruption of pure naked fury. Straight away, within those first two tracks, the uncanny versatility and variety that Misþyrming crafts and seamlessly merges demonstrates further evolution of an irresistible, irrepressible force that refuses to stand still.

Awash with intriguing nuance and frenzied hostility, ‘Með hamri’ is a fascinating and thought-provoking album that doesn’t seem to play by any rules at all and for that very reason instantly qualifies as classic Misþyrming – manic, mesmeric, mercurial … migrating without meandering. There’s a lot going on here and great value to be had from repeat listens. The subtle and effective infusion of myriad industrial, ambient, psychedelic, rhythmic and interstellar tones affords the individual songs – and, more importantly, the album as a whole – a unique complexity borne of a painstaking attention to detail rarely witnessed in Black Metal.

The way the album flows like some molten river, it’s best to listen to ‘Með hamri’ in its entirety, from start to finish. From the cold, Antaeus-like denouements to the first three tracks to the paramilitary percussion and angelic choirs of ‘Blóðhefnd’ through to the lengthy, ambitious parting shot, ‘Aftaka’ replete with piano and mind-bending precision from erstwhile Svartidauði drummer M.S., there is much to absorb here. But it’s all packed into a concise and compact Black Metal framework, culminating mercifully in an organic sound rather than an experimental one.

Though bound together inextricably by the same creative source, all three Misþyrming albums are decidedly different but equally essential. And, almost frighteningly, armed with this explosive arsenal of six new weapons, the band’s notoriously spellbinding live presentation looks (pre)destined to become even more potent.