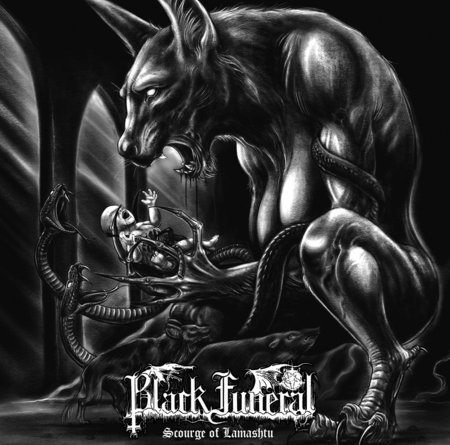 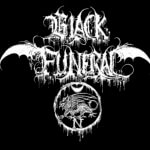 For any musician attempting to create an album that is bleak, malevolent and / or unsettling, conjuring the precise atmosphere desired must surely rank as one of the most pressing – and critical – challenges. While there are other essential ingredients – competent musicianship; inspired song writing; energy, drive, focus and single-mindedness to breathe life into the artist’s vision – the entire project is destined to fall flat on its face without the right atmosphere. Within the confines of the darkest music, particularly Black Metal and Death Metal, atmosphere is everything, Black Funeral being a prime example of an act that has since its genesis specialised in conveying a truly mesmerising, otherworldly vibe through its unique amalgamation of old, cold Black Metal and dark ambient.

Reeking of authenticity and crammed full of genuine occult credibility, Black Funeral’s tenth foray into medieval malice, ‘Scourge Of Lamashtu’, is a haunting, harrowing but uplifting affair; enshrouded in dust, sand, dried blood and cobwebs but also glistening like the sharpest of steel blades caught in the moonlight.

A quarter of a century has come and gone since we first bore witness to Black Funeral’s debut full-length, ‘Vampyr – Throne Of The Beast’, a landmark release which introduced a new breed of lycanthropic, vampyric, melancholic, medieval Black Metal to the unsuspecting public, dark ambient passages blending seamlessly with rawer parts to produce a heady hybrid that still sounds vital and invigorating today. All these years later, [vocalist / lyricist] Akhtya Nachttoter (AKA Michael Ford – incidentally a leading light in the Luciferian literary world) remains very much the driving force behind Black Funeral. However, since 2015, the founder (vocals, ambient soundscapes) has been joined by Drowning The Light mastermind Azgorh Drakenhof (guitars, bass, keyboards), ‘Scourge Of Lamashtu’ being their second album working together in cross-continental ceremony (following on from 2016’s ‘Ankou And The Death Fire’), again assisted by the highly versatile An Unnamed Spirit behind the drum kit, at times introducing a noticeably tribal element to proceedings.

The blatant Drowning The Light influences are as glaring as they are inevitable, sixth track ‘Gidim Hul (Bloodthirst of the Demonic Dead)’, for example, sounding like it could have been lifted straight from any of the previously-inimitable Australian entity’s first ten albums, most of which are essential releases in their own right. This suggests that BF is now very much a team effort, with both men contributing to the creative process.

Every bit as grim, frostbitten and dangerous as Black Metal was in its church-razing heyday, ‘Scourge Of Lamashtu’ has been granted an organic, stripped-back production, retaining that all-important analogue vibe and keeping everything raw and pure, instilling a timeless quality, the harsh yet enthralling tones travelling across the ages from some place where time, distance, age and even life and death are intertwined and therefore immaterial Invoking ancient spirits and restless, malefic demons, this is an enchanting collection of seven cacophonous incantations and demonic invocations that possesses the power to temporarily transport the listener to another world (the realm of the dead?), in a manner that perhaps only underground Black Metal can.