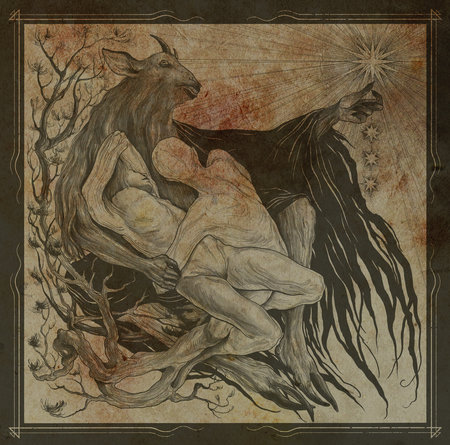 Judging by the sheer depth and magnitude of the unadulterated immorality permeating every fibre of Fides Inversa’s third full-length, ‘Historia Nocturna’, it would appear that the Italian disciples of the darkest path have spent the last six years channelling their innermost degeneracy to produce one of the most malevolent-sounding Black Metal albums of our time. Truly, this is the devil’s work, an almost unparalleled black mass ritual, traversing the crooked path with genuine menace, the embodiment of auditory evil.

The inherent magick of ‘Historia Nocturna’ is derived from the skilled establishment of atmosphere and intensity rather than any particular dependency on breakneck speed, the expert use of dynamics and an innate understanding of pacing conjuring a dizzying, unsettling expression of pure, distilled evil; ominous and sacred, blood and other bodily fluids spilled with wild abandon in His name under the comforting, concealing cover of darkness. While Fides Inversa has been an irresistible force of Satanic might since its genesis, the devout Italian ecclesiastics have taken their dedication to debauchery and strict adherence to following the darkest path to a new level hereon.

Straddling the space between ‘Mysterium Tremendum Et Fascinans’ and this latest foul offering, 2017’s stunning two-song MLP ‘Rite Of Inverse Incarnation’ served as a harbinger of the curses that were to follow and it is the same quintessential quartet that has once more joined together in unconsecrated communion to summon forth ‘Historia Nocturna’, original core members [guitarist, songwriter, lyricist] Void AD and [prolific drummer extraordinaire] Omega AD (Darvaza, Blut Aus Nord, Kult, Martröð and many others] welcoming possessed Trondheim ghoul Wraath (Behexen, Darvaza, Ritual Death, etc.) on board as full-time main vocalist while Unhold (AKA World Terror Committee chief Sven Zimper, also a member of Grand Belial’s Key and Absurd) again handles bass duties.

The album is the epitome of Satanic darkness; a blazing aural manifestation of evil itself, packed with profane power and immeasurable energy, the stench of ceremonial sacrifice all-consuming as this unholy assembly summons the darkness and conversely the light that naturally follows it when uncertainty is dispersed. Encapsulating the flexibility of Svartidauði, the authority of Funeral Mist and the prowess of Deathspell Omega as well as an unavoidable but still subtle resemblance to Darvaza, ‘Historia Nocturna’ is nevertheless blessed with a unique identity all of its own, the music so compelling in its intrinsic malice and wickedness that the 48 minutes – comprising the mandatory baptismal intro and six sublime servings of orthodox Black Metal- fly by in a flurry of incense and goat hooves.

Boasting stellar musicianship, complemented by an excellent production job, which allows every instrument space to breathe unobstructed and wield telling influence, as well as wondrous lyrics and inspirational artwork, ‘Historia Nocturna’ represents a triumph on every level. Of fire and brimstone, ferocious, thunderous and wholly demonic, it’s an arcane and transcendent collection of black spells ushered into existence by the steadfast apostles of Fides Inversa, who have indeed come to do the devil’s work.