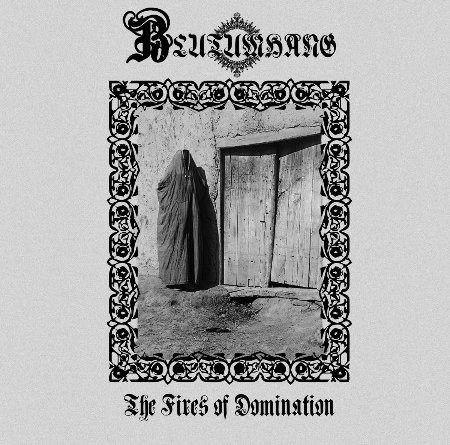 At last there’s something exciting stirring once more in the deepest, darkest recesses of the underground and how pertinent that it should surface in Black Metal’s ground zero. From the hellish opening moments of nasty Norwegian duo Blutumhang’s debut full-length, ‘The Fires of Domination’, it is clear that we are dealing with something bizarre and twisted and totally untamed – a rather extraordinary recording in times where monotony and tedium have become the order of the day.

Playing it safe is not the Blutumhang way and the mood of adventure and ambition is firmly set in three-minute ambient intro ‘Hatred of Absolution’ where folk instruments performed in a depraved manner, samples and agonised screams of the damned vie for prominence, culminating in a wild maelstrom of head-warping insanity. The Black Metal here is of the lo-fi and distant variety, ‘The Treacherous Whore’ crashing across the mountains and flooding the plains beneath with perverse intent, warm and fuzzing, shrill and paradoxically atmospheric.

Once the senses acclimatise to the challenging production, masterfully-crafted, uncompromising Black Metal – dark and deep, malevolent and majestic – pours forth in an undulating tumult, with proceedings embellished tremendously by Blutumhang’s laudable tendency to seamlessly incorporate classy traces of experimentalism into the seething mire. Throughout the album, which at times sounds like the score to a new Dario Argento movie, the original spirit of Black Metal is evident, the chilling nine-minute ‘The Fateful Hands of Fury’ providing a suitably unsettling, unorthodox denouement to a haunting, horrific affair.

‘The Fires of Domination’ presents a strange and macabre amalgam of raw noisy Black Metal with sparse folk sensibilities, a concoction that works extremely well – the title track is an interlude that would not be out of place on Hate Forest’s ‘Battlefields’; the aforementioned closer even more memorable – and provides a welcome injection of freshness and new purpose to a subgenre that sometimes seems in danger of becoming terminally stale and jaded. Blutumhang isn’t for everybody and will not be snapped up by a bigger or more-commercial label but this is undoubtedly the sound of an act (and a landmark release) destined to achieve cult status amongst those craving crude, challenging Black Metal that pushes the boundaries yet retains its ‘true’ essence.