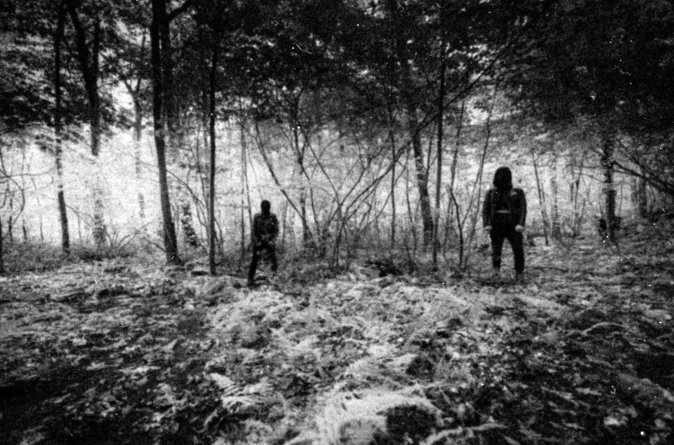 Bog Body’s primitive, savage death rituals celebrate the transience of human life in all its harrowing glory, the fleeting nature of existence mocked and rendered almost irrelevant by the permanence of our approaching death state. With history showing that the flickering flame of life is as likely to be extinguished by man’s innate desire to conquer and survive as by any natural course, suffering and death a certainty, is there any point to any of this or should we just throw open the gate of grief?

Bog Body: a wonderful band name. A bog body is, of course, an ancient corpse that has been retrieved from a wet peat bog and, due to the characteristics of its final resting place, the naturally-mummified cadaver is largely preserved, with flesh, organs and skin still intact. I believe a lot of living people are akin to bog bodies walking around zombie-like, existing without purpose or meaning. Would you agree that living can be almost as grotesque as dying? Perhaps we should envy the bog bodies?
“Inherently we’re all aimless zombies, without purpose beyond those created by ourselves. A false icon, wealth or any other banal notion will maintain the widening gyre and endless morbidity. It is up to an individual to find worth outside of superficial emblems; a painfully spiritual atheism will free you from after-death fear or longing and will commit you to the here and now. We can envy the bog bodies’ immortality, as they will outlast the lot of us, but we have the spark of life to create and master, to explore, and will what we want from the world. A corpse has no agency.”

It seems somewhat poignant that so many of the bog bodies unearthed – here in Ireland at least – suffered decidedly violent deaths. In keeping with the bloodthirsty nature of humanity, Clonycavan Man, Old Croghan Man and Cashel Man, for example, were all murdered or sacrificed, cut down in their prime, with signs of mutilation and torture prior to death. I guess some things never change?
“Things do not change: torture tactics, murder techniques, mutilation and sacrifice have not in centuries. The only things different are the technologies used to carry out and document such acts. We’ve formed new names for the same deaths, new titles for the same punishments. History is a wheel that will crush us forever.”

Forensics reveal that many of these individuals were in their 20s or younger when they died. Average life expectancy might be greater now than it was centuries or millennia ago but, despite the apparent societal and technological progress that mankind has made, in some respects, there is arguably more shit and danger to wade through today in the global village than what our ancestors had to contend with. Isn’t it remarkable that we can’t develop a just and safe social order without conflict and inequality?
““Tolerance is not a Sapiens trademark,” says Yuval Noah Harari. For how intelligent a species we are, and how far we’ve come, we can’t seem to figure out how to evolve, co-habit and prosper without the continued destruction of ourselves. Yuval Noah Harari summarizes our complex really well; “Seventy thousand years ago, Homo sapiens was still an insignificant animal minding its own business in a corner of Africa. In the following millennia it transformed itself into the master of the entire planet and the terror of the ecosystem. Today it stands on the verge of becoming a god, poised to acquire not only eternal youth, but also the divine abilities of creation and destruction.” Whether we show it or not, we all internally possess these god-like impulses to conquer and survive, whether they’re beneficial or regressive to humankind.
“Historically we haven’t been able to develop a just and safe social order, it’s just not a “Sapiens trademark”, it’s this god-like complex that’s contributed to the extinction of the Neanderthals, Denisovans, Homo soloensis and countless other Homo species. Who’s left to destroy but ourselves?”

Human sacrifice is no longer as popular as it used to be, at least not in an official capacity anyway. Maybe we could bring it back and build a new reality TV show around it? I don’t think it would be any sicker or in poorer taste than some of the utter garbage masquerading as popular culture these days.
“We will just say that those who would benefit the most from death are sadly not the ones who would meet it in such a way.” 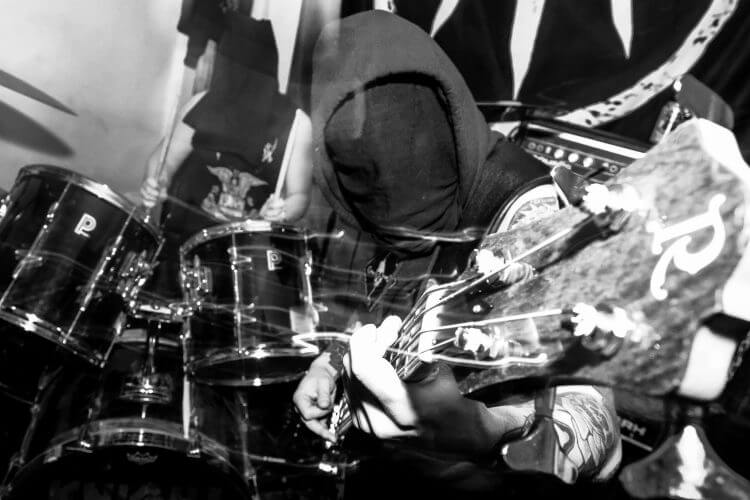 Real life has become even stranger than fiction. We’re certainly living in bizarre and surreal times, where the multitude of problems afflicting humankind are as apparent as ever they have been. Twenty-twenty feels like a tipping point for the world and – with cities on fire and violence in the streets – the so-called pandemic would appear to be the least of our worries?
“It is hard to answer how the state of the pandemic has affected other aspects of society outside of America, but as it stands here, it has only added fuel to the fire. It has exacerbated a divide already deeply separated here in the States. An issue innately of no political backbone, a global health emergency, has turned into a political show-down of who votes for who.”

Looking on from afar, the impression I get is that the United States is in total turmoil. What is the general mood in New York? The city was hit hard by the virus, both from a public health and economic perspective. The effects will be felt long-term. People are afraid and people are angry. There’s political unrest and protests every day, the threat of violence omnipresent. That’s how events are being portrayed on the news anyway. Are things being blown out of proportion? Is it possible to ignore the madness and live a relatively normal life there?
“The impression you got sounds very accurate. It’s hard to say what the international community sees of New York, and the United States as a whole, depending on your news source, but yes, the streets are on fire, the voices are loud, the people are angry and desperate and have had enough. People are leaving the cities, small businesses are closing for good, people will be evicted from their homes and the economy buckles. The corpse trailers outside of many hospitals have dispersed, but the effects of the pandemic are still present. People are quick to want things to be ‘normal’, but that assumes ‘normal’ was good.” 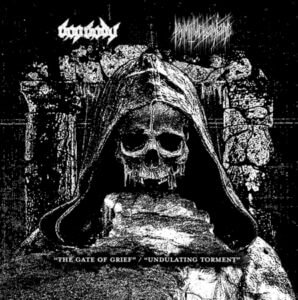 Following on from your 2018 demo, ‘Through The Burial Bog’, Bog Body’s second release is nigh – a split MLP with Primitive Warfare. Comprising three new compositions, your contribution to this record is titled ‘The Gate Of Grief’. Where or what is this gate? Is it the moment before or after tragedy?
“A threshold that was entered with great tragedy to spring new life. Humankind leaving Africa to Asia, a trail of suffering and death to set a new world ablaze. The Gate of Grief is Bab-el-Mandeb, a perfect summary of human existence. The faces of Janus, the past and the future, the hammer and the nails; the bog body. In its preserved state, it has gained immorality and in its death, it gave life. The Gate of Grief is the same scale, a road to the future paved with cobblestones of skulls.”

It’s an interesting collaboration as the bands are markedly different but complement each other very well. How did this partnership come about and how much do you enjoy Primitive Warfare’s positively pummelling contribution to the record?
“We also believe it’s a complementary collaboration. Primitive Warfare’s philosophy to their craft is similar to ours, and although there are obvious differences, we are both cut from the same cloth. Both of our demos were released on Stygian Black Hand, and that’s how we came to know of each other. Primitive Warfare approached us about collaborating on a split release, and it was an easy decision to make. We also had done a short east coast US tour in support of ‘Through The Burial Bog’ and performed a few shows with them on that run; the connection was organic and instant.” 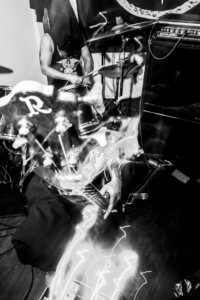 ‘Strangled In The Throat of Perim’ stands out from Bog Body’s other two contributions to the split album in that is a more ambient and experimental offering, yet every bit as unsettling (perhaps more so!). You’ve captured and channelled a nightmarish disposition and it sounds like a haunting, disturbing horror movie soundtrack. Was this the sort of effect you were aiming for? Also, what instruments are being used on that track and what is the Throat of Perim? Google drew a blank on that one…
“Perim is a volcanic island in the so-called ‘Gate of Grief’, and in volcanology, the throat refers to the entrance of the volcano that ejects lava and volcanic ash. Our minds wandered with the idea of what would occur if one was sacrificed to the depths of the magma chamber. The heat, the claustrophobia, all of these elements, tangible and something we feel every time we play, factored into the track. The wavering bass and hypnotic drums felt perfect for us to incorporate synthesizers in addition to the usual instrumentation.”

Your music is otherwise crushing, oppressive, rumbling, earthy and sludgy. The inherently heavy vibrations emanating from the speakers are largely due to your rather unique use of bass as the main / lead stringed instrument. Why have you decided to go with this bass-heavy approach? Were you influenced at all by Ride For Revenge? Also, is this drum-and-bass method something Bog Body will persist with moving forward on subsequent releases or do you view the future as a blank page?
“The bass-heavy approach was an easy decision to make, it’s an instrument of simplicity and massive output. It encapsulates primitivity, it’s an instrument that forces you to confine to savage music making. The Ride for Revenge influence is apparent and one of many we had in mind when it came to the bones of this project. At the core, our drum and bass approach is the ethos we intend on staying true to for the life of this project; however, the future is a blank page in the sense that we still have many things planned, yet to be employed.” 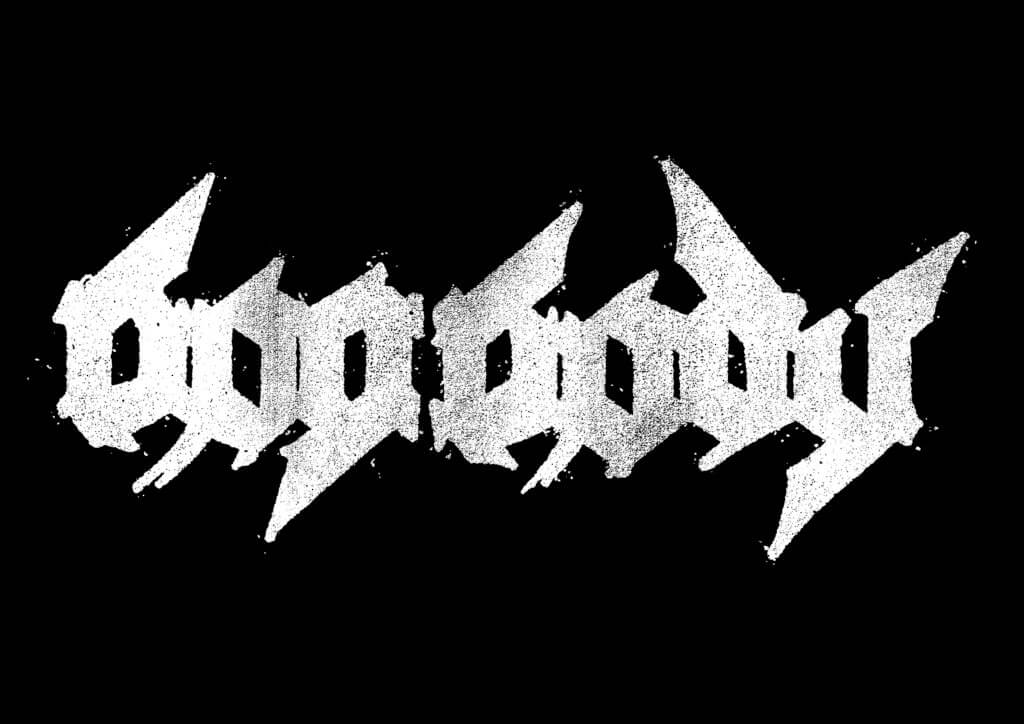