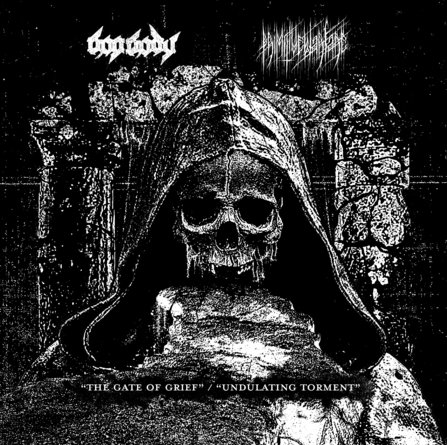 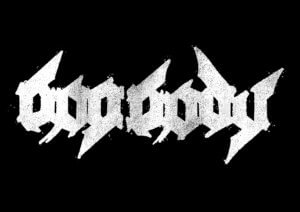 Unnerving North American two-man units Bog Body and Primitive Warfare corroborate on this magnificent split MLP, presenting half an hour’s worth of homage to death, decay, suffering and war to coincide perfectly with these dark and disturbing times of pestilence and plague. First Bog Body fills your disinterred corpse with unease and anxiety on the three tracks comprising ‘The Gate Of Grief’, then Primitive Warfare pummels you back into the ground with the four sharp attacks that constitute ‘Undulating Torment’ – between them, the offerings of both bands the perfect union of intuitive dread and worst nightmares realised.

From the swollen, seething, overflowing sewers of New York, the brilliantly-named Bog Body have (de)composed a trio of wondrous new graveside orations, following on from their outstanding 2018 demo ‘Through The Burial Bog’, which sent shockwaves through the underground’s deepest trenches. Almost nine minutes long, ‘The Gate Of Grief’ is the epitome of ancient evil unearthed, an exhilarating exhumation of disintegrated aural decadence – twisted, rotten and enshrouded / enshrined in grime and putrefaction, the bastard offspring of rot and decay.

Their trademark reliance on bass as the premier stringed instrument lends proceedings a deliriously sludgy, cavernous and earthy dimension (similar to Defuntos), Bog Body’s distinctive rumbling renaissance simultaneously both soul destroying and empowering as they conjure an otherworldly atmosphere that is both terrifying and enchanting. Like birth as the precursor to slow rot and ultimate death, the eerie. ominous ambience of ‘Strangled In The Throat of Perim’ precedes the inexorable horror that unfolds on ‘Bile Blossom’, nourishment poisoned and hopes shattered as the endless cycle of life and death rotates irreversibly. 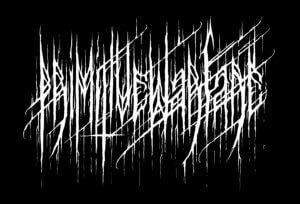 For their part, after a short-lived, deceptively-serene introduction, the uncompromising ferocious onslaught of Primitive Warfare strikes with the intent of a claw hammer to the bridge of the nose on ‘Bahr Ahmar’ and relents not once as their barbaric Black / Death / Grind hybrid signals the unstoppable, irreversible onset of utter obliteration and annihilation.

Coruscatingly violent and belligerent, the South Carolina duo’s irreverent warmongering chaos induces the mindless viciousness that made their Canadian forefathers Revenge, Blasphemy and Conqueror so essential, four fierce offensives crushing and punishing as they blast machine-gun-like through the ether. Though markedly different in their approach to delivering the shivers, Bog Body and Primitive Warfare complement one another perfectly and have executed herewith a timeless terror caked in mud and dried blood.